The Ridiculous Redhead > Before & After > The Green & White Drum Table

The Ridiculous Redhead September 19, 2011 2 Before & After, Furniture, Kelly Sherman Design

I’m not sure of the exact year this little gem was made but it was definitely in the Era of Ugly. You know the type. You have seen them in the thrift store and thought to yourself “Why was that ever in style?” It’s got that weird brown stain that reminds you of the 70s and paneled walls. It’s hardware is that tarnished brass that says “cheap” not “patina”.

It was so awful the boyfriend actually didn’t want me to bring it home saying he couldn’t imagine it could ever shake off the funk. Oh, ye of little faith.

In all its sad Before glory:

And here is the After: 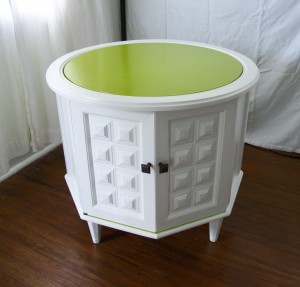 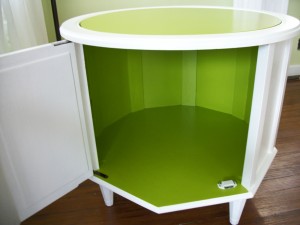 So I did a bit of an overhaul with paint from Safecoat. The main octagon body is a crisp white while the inside is a rather daring and bright shade of green. (I have been dying to paint something this color since I brought the little paint can home!) The round top just lifts out to be reversible – green on one side and white on the other. This way its future owner can decide how much green they can handle.

It has been listed in the Kelly Sherman Design shop where it can be purchased.  There are also a few more pictures to ogle.

For those who noticed that the original had a marble top, you get 2 points.  It was pretty stained and was a wreck.  I am working on another way to reuse it.

For those who noticed the sly ‘I told you so’ to the boyfriend, you get 3 points.   And just so you don’t think I am talking behind his back, I assure you there was a ‘I told you so / I am awesome’ conversation to his face.