How an old pickup truck is more green than you think

If you have seen me drive anywhere since I was 22, you have seen one of my most prized possessions – my pickup truck.  Yes I said 22, as in years old.  I bought it new in January 2000 (you can do the math on my age) and it’s been with me ever since. 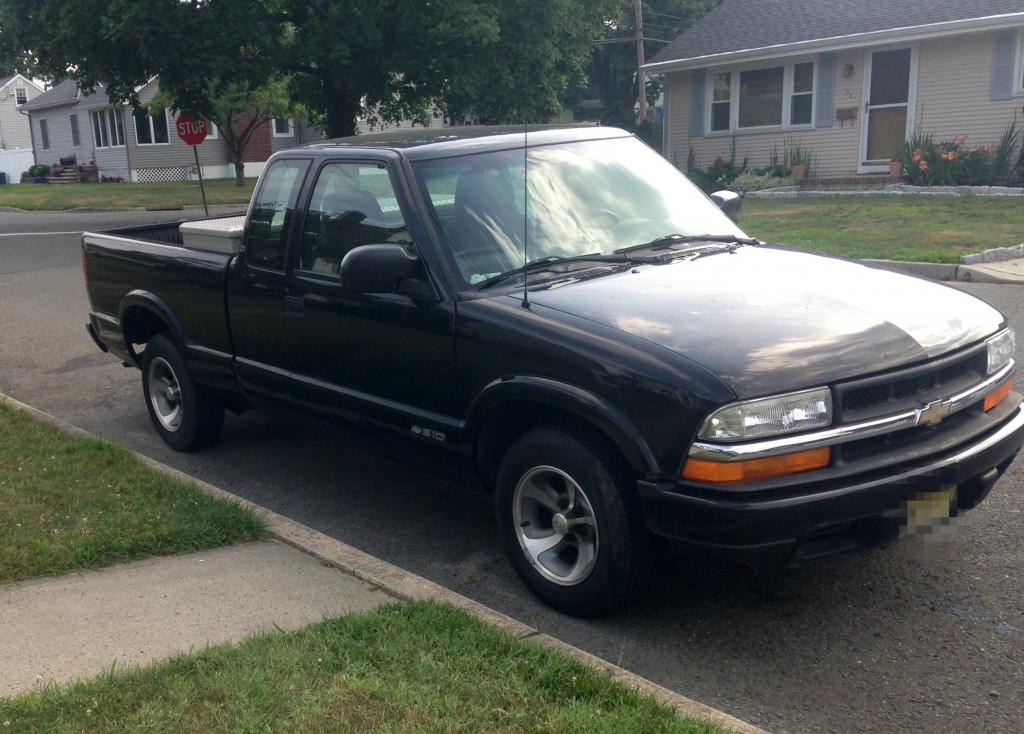 It needs a good cleaning after all that time sitting around.

I love this truck.  It’s a Chevy S-10 pickup with a tool box in the bed that still contains my horse stuff although I haven’t been on a horse is years.  I keep it there just in case I come upon a horse on the side of the road that needs something, I will be ready.  (Really our house is too small to bring it in!) It is a manual, a stick, with a small gear box that shifts like a race car. It is fun to drive like a crazy person.  My hair never looks as good as it does when I drive in that truck with the windows open no matter what I do to it.

Almost two years ago tragedy stuck and the truck broke down.  And what I really mean by broke down is blew up.  The comment was that the engine & radiator blew up like something out of a Michael Bay movie.  I was devastated.  Not only was it going to be a lot of work but also a lot of money to fix.

What was I going to do now?  It could cost almost as much to fix it as it was worth.  I would have to find an engine.  But to spend the same amount and buy something else would mean buying a clunker with a sketchy history.  So fixing it was the choice.  My friend helped my find an engine and had it shipped to me. Another “friend” told me he would do the work at a “friend” rate.  I use quotation marks here because that never happened.  He totally let me down and instead of it getting fixed last summer before the baby arrived it sat another year.  So we have been mostly using one car between TB & I which was an enormous inconvenience to say the least.  My mom had graciously let me borrow her old truck probably never guessing it would be so long until she got it back.

The same friend who found me the engine also found me a new mechanic.  A ton more money later I am now once again the proud owner of a running truck.  I can’t tell you what a joy it is to drive it again.  It’s all banging through gears and singing loudly again.  It really is the antidote to a bad day.

So you may be asking yourself how I think an old truck is still green.   I can’t get the best gas mileage right?

Well no.  I’m not sure what the miles per gallon are ( I will figure it out the next time I get gas) but that’s not the only thing to think about.  Car commercials make you think that MPGs are all that matter.  Do you know the carbon footprint of manufacturing your car and it’s transportation to the dealer from where it’s made?   I have no idea what mine is but a report from Toyota in 2004 said that manufacturing and delivery to the dealer generated 28% of the emissions the car would generate over it’s lifetime.  So every time you buy a new car there is this big chunk of emissions to take into account.  The MPG savings would have to be big enough to compensate for that plus any environmental cost of adding that car to the landfill when its life is done.

I have had my car almost 15 years.  Many people get new cars every five years.  That means I have saved that 28% of manufacturing emissions twice.  In order to overcome that, the new car would have to be a crazy efficient model.

Not everyone loves their truck the way I do or keeping the same one isn’t possible.  Then maybe buying a used car would be the next best thing since it doesn’t have to be manufactured again.  Or maybe you just want a new car.  TB & I have been drooling over the Tesla Model S for years now.  It’s beautiful, fast and electric.  But they start at $70k so that’s not happening anytime soon.

Just like with anything else around this house, being green means we are using what we have.  By fixing what we have we are keeping what’s already made out of the waste stream.  So even though the Model S is a dream I will enjoy my roll down windows and rediscovering all the cds that I haven’t listened to in two years.

My view for the first time in a long time. The poor radio is missing knobs and paint.