I know this may not surprise you but I really hate killing bugs.  I know they serve their certain purpose in the world and who am I to stop that.  I do not like them in my house or on me of course but most bugs keep a distance.

The ones that do come inside are usually caught in a plastic takeout container (finally a good way to recycle them!) and quickly ushered out.  I find that containing them instead of using a broom for example gets them outside without dropping them. It also eliminates the even more scary problem of losing them on the way and wondering where they are now.  They are then free to do their good work again. The spider for example will eat a lot of other bugs as a way to pay his rent.  I currently have a spider outside my kitchen window that is a champ at catching things.  She looks like one of those doomsday planners with her storing skills.

This is all very well and good for most bugs because they are respectful.  But not ants.  Ants have no respect.  They will come into your house, traipse all over the counters in broad daylight and eat whatever the heck they feel like.  And the thing about ants is there is never one ant.  There can be one spider but never one ant.

These are the only bugs that really freak me out.

In the last two years I have found several large ant hills among the gardens around the house. Last spring there was one in each of the veggie beds.  Yuck.  That definitely put a damper on spring planting.  There was one in my flower bed a few years ago and I didn’t weed it all summer.  It was a mess.

The problem is what do you do with them?  I don’t use chemicals in the yard at all.  I especially can’t spray some toxic stuff in the veggie gardens.  Because I’m me, there were a lot of Google searches for ways to get rid of them.  The ideas range from corn meal (they explode when they eat it apparently) to cinnamon to boiling water.  All seem like vague suggestions with not much confidence in the solution. So far we have used boiling water to get rid of the hills in the veggie beds. (The funny thing is I don’t feel bad about it at all.  I feel bad about just chasing other bugs but boiling alive ants is a-okay.)  I needed to be able to plant seed without being attacked. We used cinnamon around doorways with mixed results. For the most part I have tried to ignore the visions in my head of ants living in all my walls, eating my whole house.

That was until a few weeks ago. 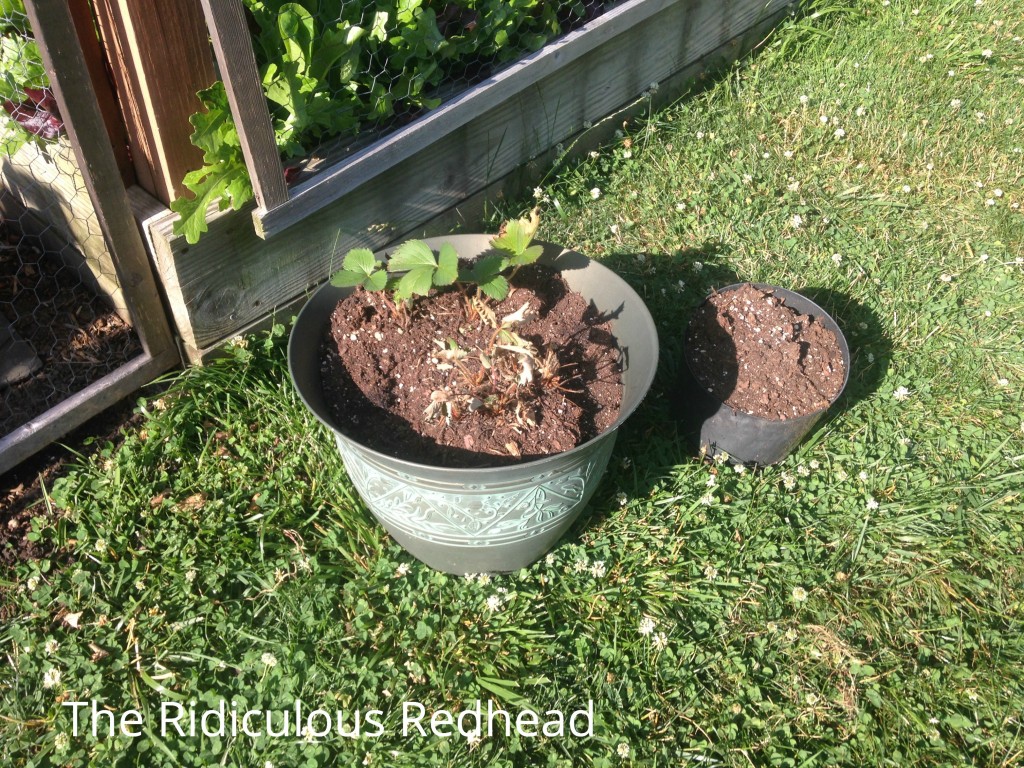 For me this is the nightmare that is up there with going to school in your undies.  I was outside happily transplanting some strawberry plants.  They were drying  out too fast and needed bigger pots. The large pot had dirt in it already and had been sitting awhile.  I carried it across the lawn.  I took big shovelfuls of dirt out of one side and put a strawberry plant in.  I turned the pot around and repeated the same procedure.  Since there wasn’t a lot of room I put the extra dirt into another pot.  I grabbed the strawberry plant, put it in the pot and looked at my hands.

There were ants on my hands.  There were ants on the strawberry pot.  There were freaking ants EVERYWHERE!  And now I am not talking about 20 ants. I am talking about thousands of ants.  The pot that had been sitting housed an entire ant city and I just put my shovel through it.  I do a dance while getting my gloves off and grab the hose to wash off my legs which had ants on them.  I am completely freaking out and then think “What do I do now?” I texted TB who suggested throwing one of the ant traps we bought for the house (a few ants on the counter) in which I do in my haste.

After I calmed down, my curiosity took over.  I couldn’t help but go look at how the ants were dealing with the whole world literally being flipped upside down. And they were amazing.  It was like DEFCON 1, all hands on deck.  There were tiny ants carrying babies, Others that were moving dirt to fix the infrastructure.  It didn’t matter that I had also tried to drown them with the hose (didn’t work),  within a few hours their progress was amazing. 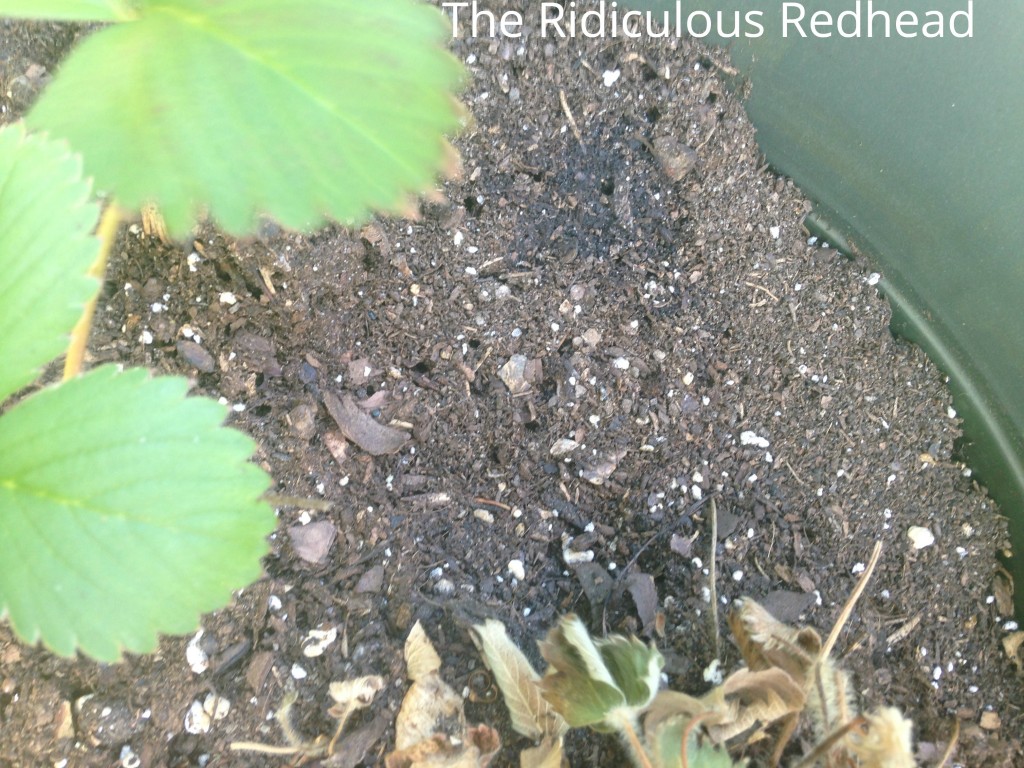 See all of those holes?  Tunnels.  There are a lot of ants I’m sure in this picture but they do not show up in photos. Except for this one with the wings.  And may I ask what the hell is this flying ant thing?  It’s part of the colony and completely grosses me out.

As of today they are still in the pot.  The ant bait poison didn’t work as well as I had hoped but frankly could have killed hundreds and not made a dent.  The problem with the poison is that I now have to throw out the 2 strawberry plants that I have had for years.  And as luck would have it they seem happy in their new pot and just sprouted new leaves. At least someone is happy about this situation. 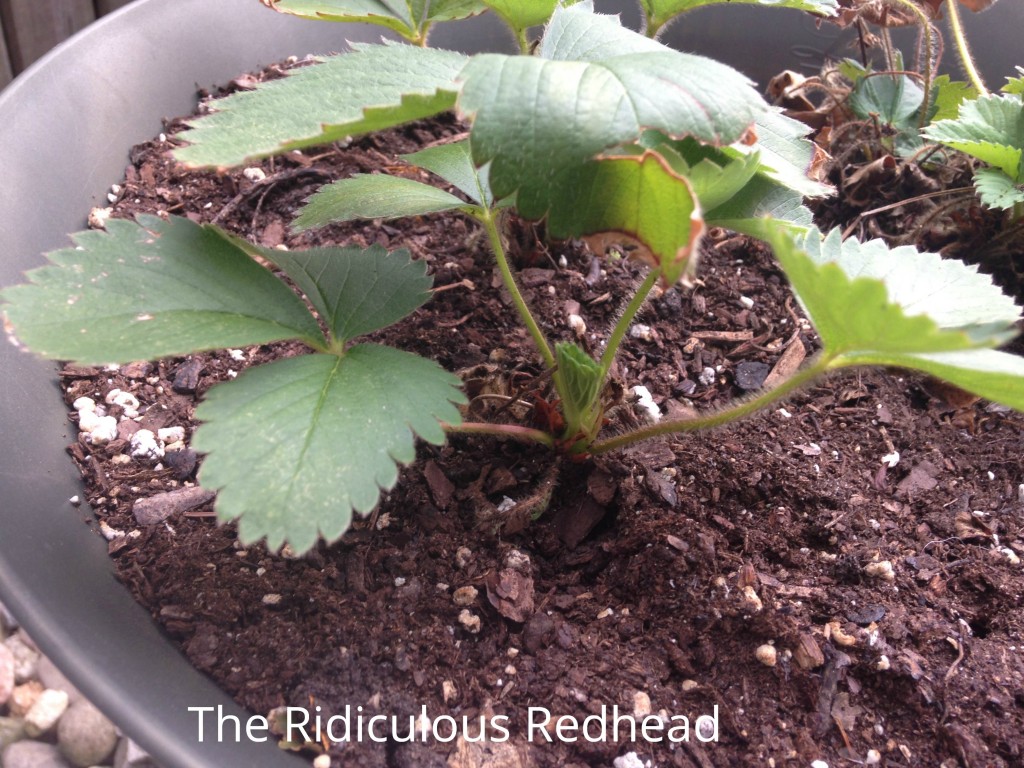