We are in a really weird place as far as the garden is concerned.  After Labor Day, the entire world posts on Facebook that summer is over so your brain starts thinking it’s fall.  But in real life summer isn’t over for weeks.  And it was 90 something degrees on Saturday.

This is the time of year that it’s still hot and tomatoes are still growing but you also need to start thinking about a fall crop if you are planting one.  Many of the cool weather plants you plant in early spring can be planted again for a fall harvest.  It’s also time to look into ordering garlic and shallots as they get planted before the ground freezes for a harvest next June.

First in our round up are the summer crops.  Here we have the tomatoes, one Matina and one Sweet 100 (I think that’s what was in the compost they reseeded themselves from).  I have been right on top of pruning this year, especially since they are in a flower bed and I want them to look nice.  They are probably still too big as they keep trying to grow over the neighbors 6′ high fence but it is a marked improvement over the previous years’ tomato takeover. 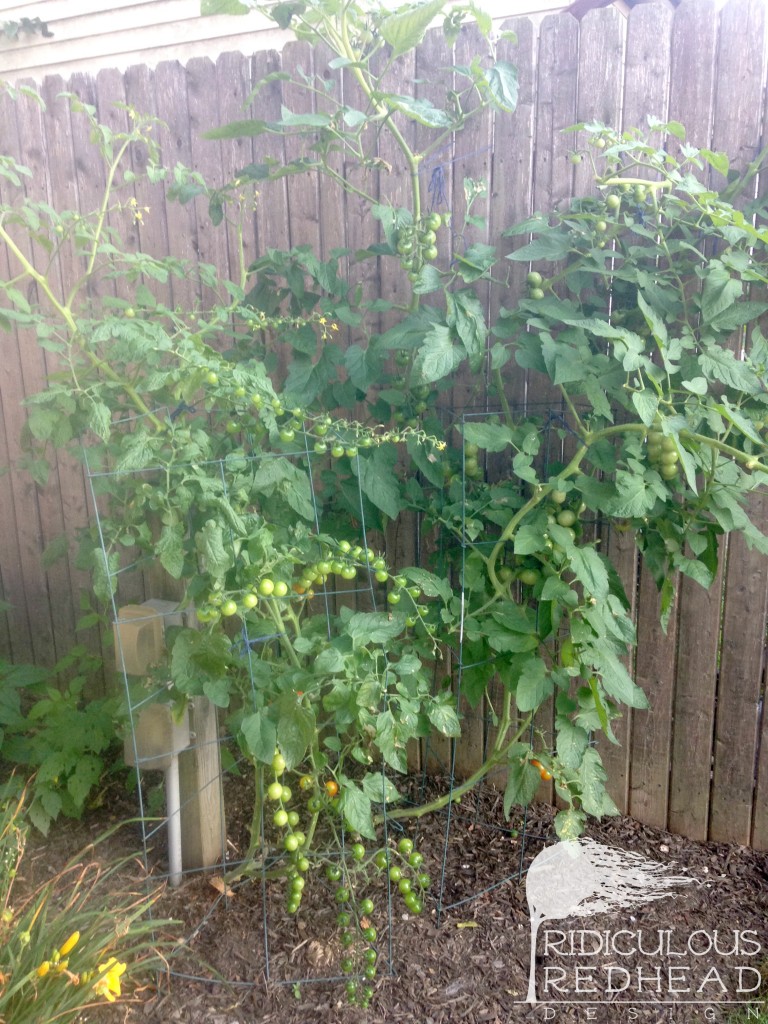 I wasn’t sure if we were going to end up with ripe tomatoes since these got such a late start but we have already gotten some red ones and more are ripening everyday. 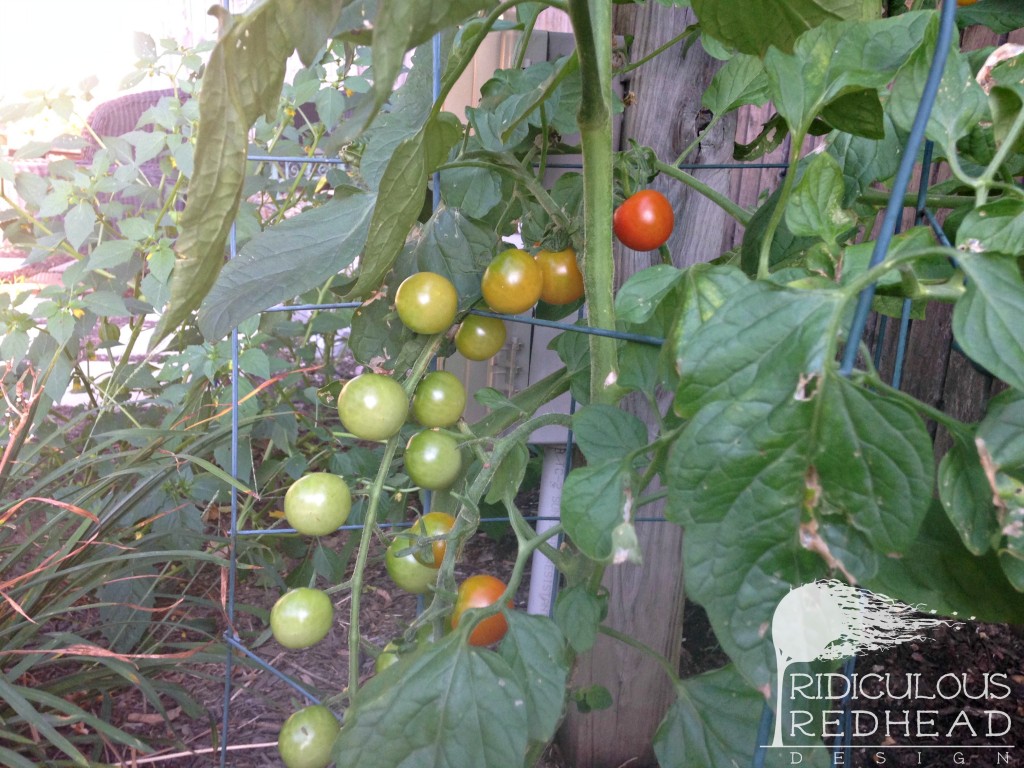 Here are the tomatillos.  These also reseeded from last year but at my friend Sarah’s house.  I have never grown them before and with two transplants I wasn’t expecting much.  Apparently they like their new home and have filled in nicely.  Too nicely.  I trimmed these back today. 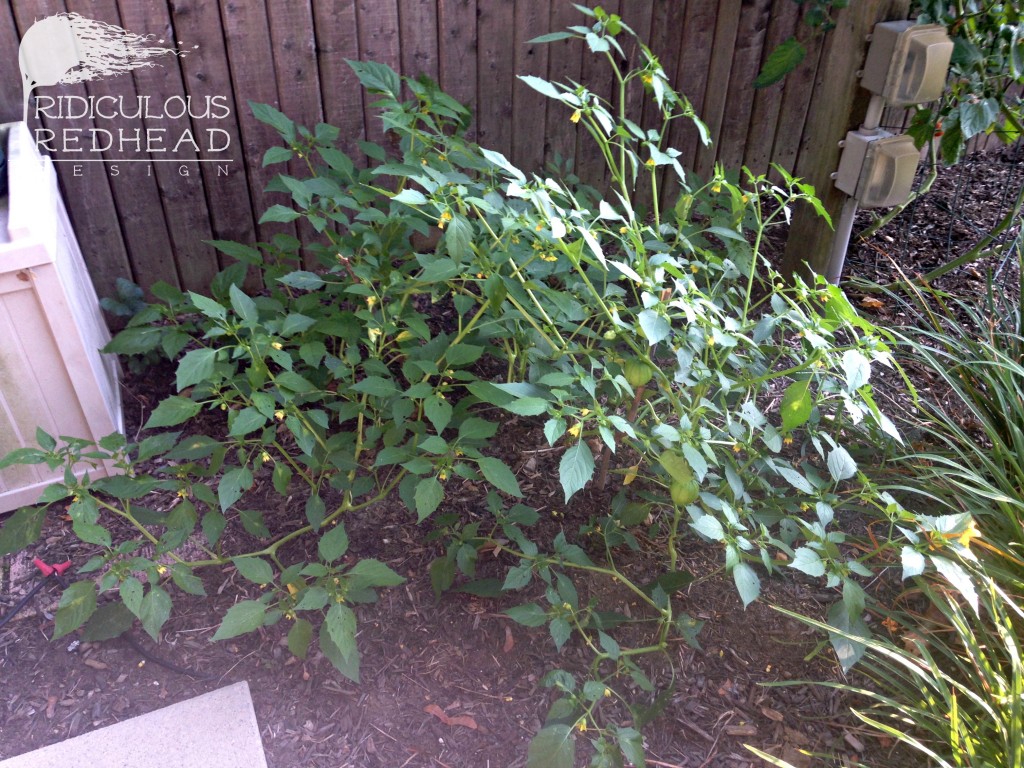 The tomatillos are fun to grow because after the flowers appear you get these paper lantern looking husks.  After awhile (I am told) the green tomato like thing grows inside.  I’m not sure we will get there before the first frost but here’s hoping.  Until then, they are just pretty to have around. It’s plants like these that remind you that edibles can be used in landscaping.

Next up are the edamame (soy bean) plants.  These were delayed because of our rabbit house guests and per the seed pack shouldn’t be mature until the end of October, after first frost.  But this garden is in all day sunshine and things tend to grow fast.  I was very excited to see edamame bean pods show up this week.  I can’t remember how long it takes from here but I feel like we have a real shot for a nice harvest. 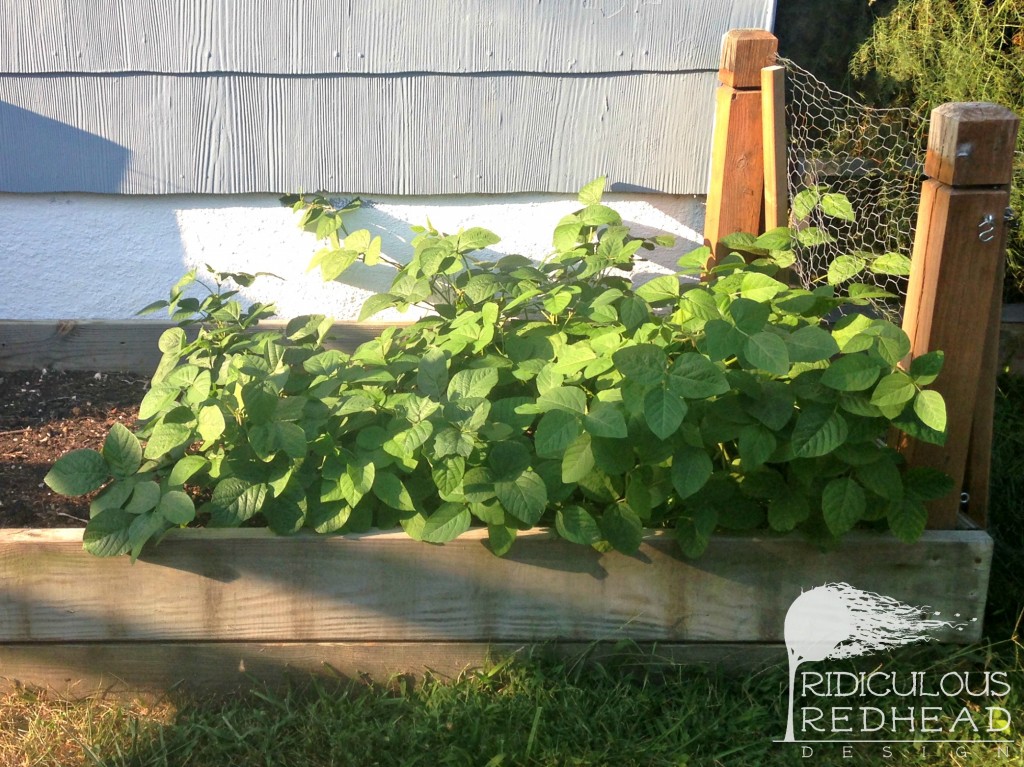 Look at the furry little pods! 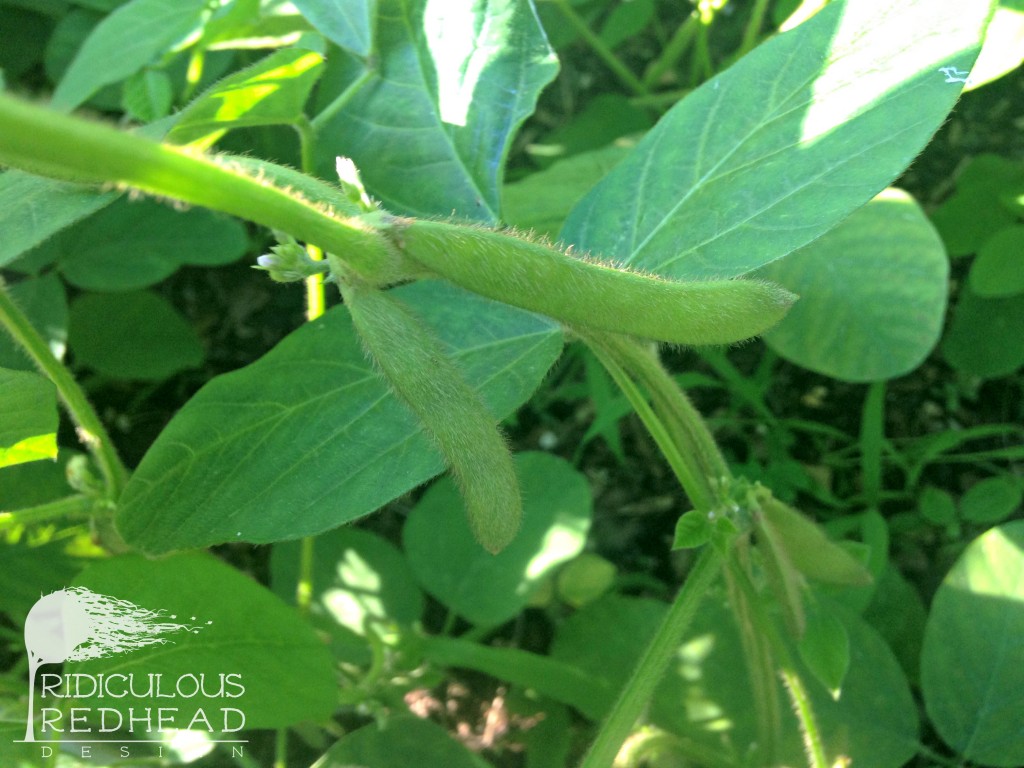 Here is one of my favorite flowers for the garden – the sedum.  It came with the house but I had no idea what it was at the time.  After seeing one in a garden center,  I finally found out what it was!  These are one of the first plants to start growing (when the bulbs are just starting to come up) and these bloom in the fall (you can see they are starting to turn pink now), although there are many types.  They are also really hardy.  That means you get a plant that looks good from spring until fall that’s hard to kill.  That’s a lot of bang for the buck.  Bees also love them so putting them near your veggies will ensure good pollination.  The only problem I have with them is mine get really big.  I split this one last year and it has completely filled in.  They are a lot taller than any of my neighbors too which means there is always a big rain that knocks them over. 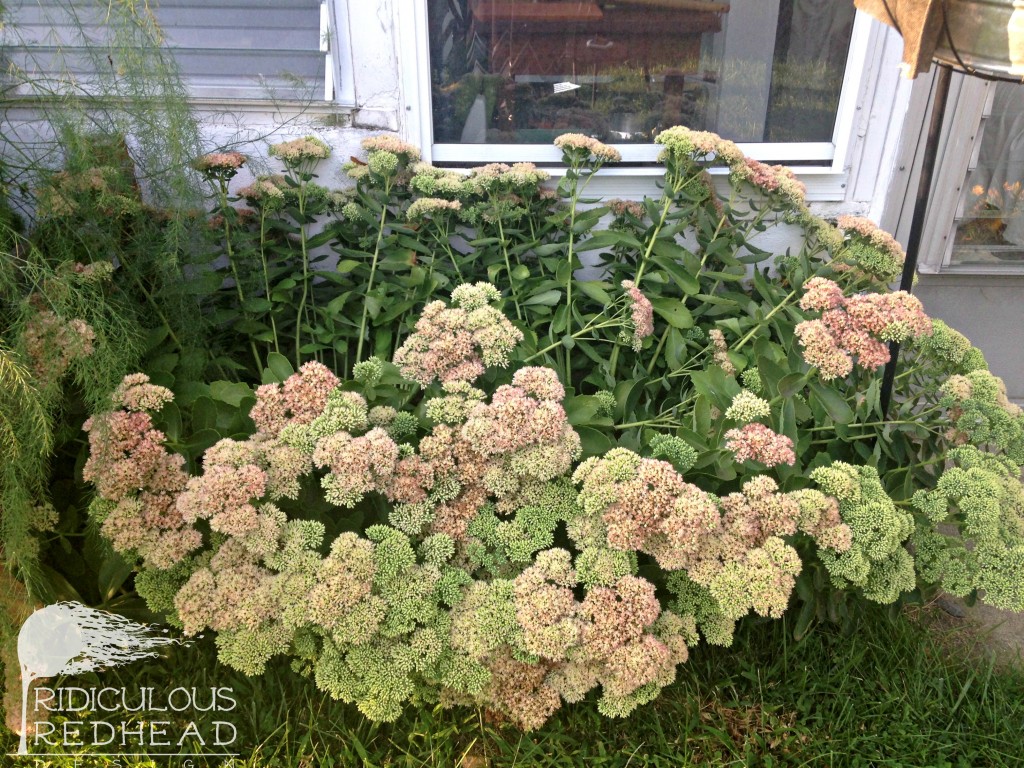 Next to the sedum are the asparagus.  As I have mentioned before, they are known as a spring vegetable.  I still have spears coming up and it’s September.  These have been trimmed back so we can mow the grass and some of the stems would be 8-9 feet tall if they weren’t bent over. The red berries are their seeds as I have an heirloom variety of Martha Washingtons instead of the Jersey bred hybrids that only have male plants.  I have enough boys in this house so a few females don’t bother me.  I just love the ethereal quality of the ferns and I wish I had a bigger yard so I could have these all over. 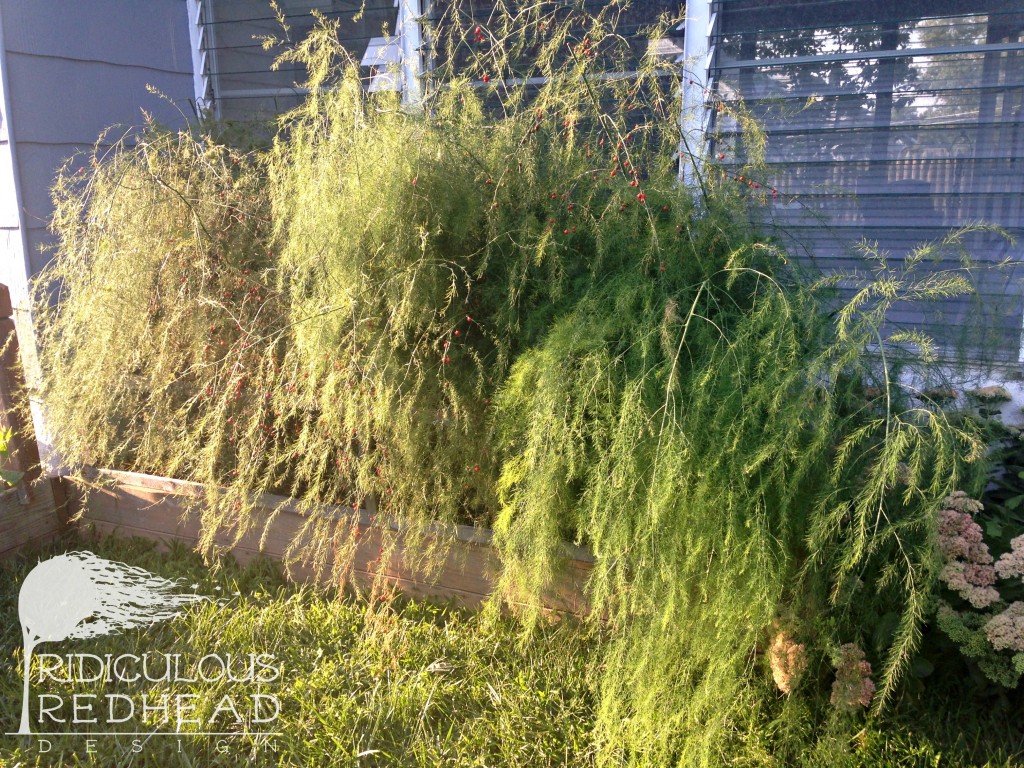 The herbs have done well this summer and I have learned how to use them in more dishes.  The classics though are still the best.  The basil finally kicked in and now we have a bunch, enough for a good round of pesto or two.  Here is about half of what we have. 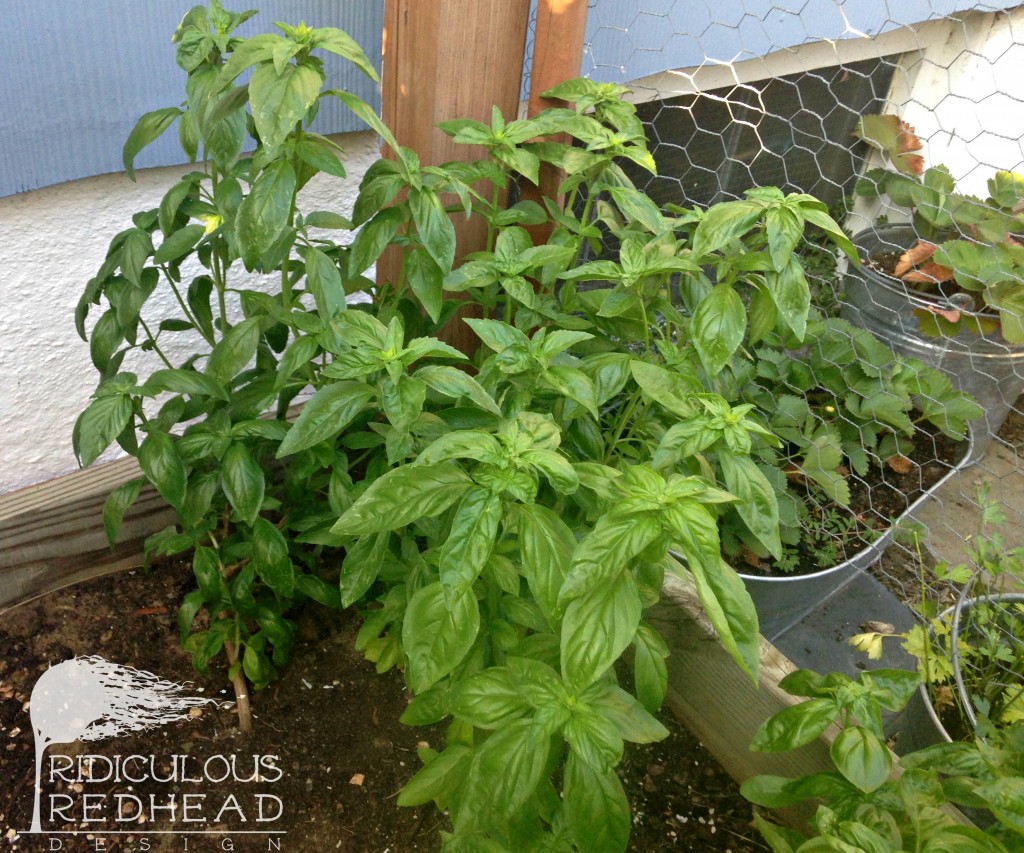 Now onto the fall crops.  I really just planted the same seeds in the same places for the most part.  I guess it’s been about 3 weeks since I planted the seeds.  Here tiny carrots are peeking out.  You can already see the familiar shape of the greens.  The ones I planted under the cucumbers have partially come up.  The seeds I planted in empty space in the other bed haven’t done anything.  I’m not sure if I haven’t watered well enough of if it’s just too hot. 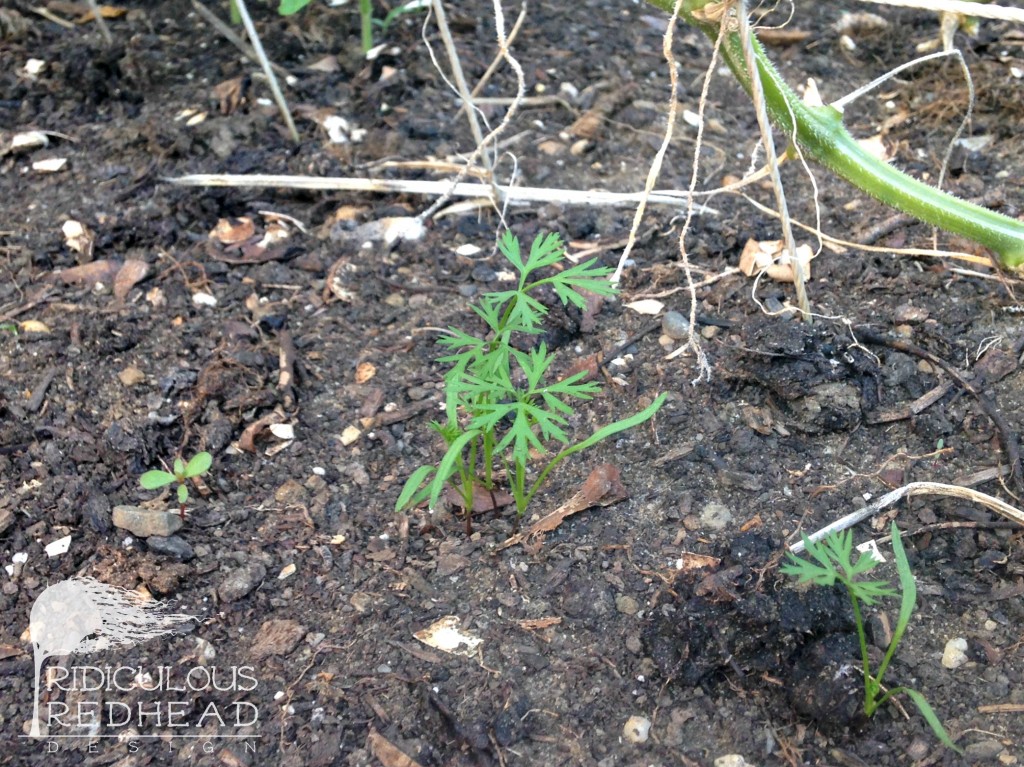 Since the arugula I tried growing in pots in the spring didn’t go so well, I planted these seeds in the garden bed.  The seed pack says 7-14 days to germinate.  I had tiny leaves poke through in three.  These are big enough to eat and I added more seeds for a continuous harvest yesterday. 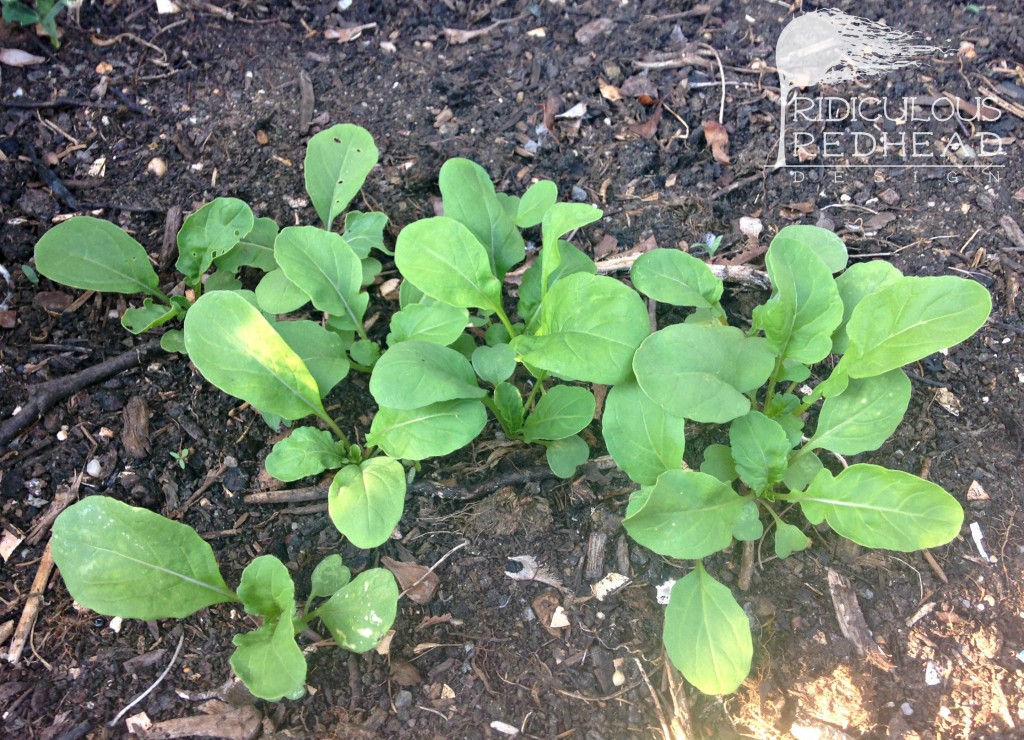 And last but not least, we have the peas.  These are English shelling peas, something I never would have guessed I would like.  They are delicious.  You can stand there in the garden and eat them right off the vine they are so sweet.  We had such a great harvest in the spring that I replanted in the same spot plus added them to an empty space next to the arugula.  These are fun to grow for beginners too since they grow fast and you can see changes every time you look.

How is your garden going?  Have you planted anything for a fall harvest?