Back when I was posting the final makeover pictures of the Habitat for Humanity furniture, I had a few people ask if the pieces were for sale.  Since they were being auctioned off for Habitat after they were done, I couldn’t sell them myself.

One of those people was my friend Dori who had been looking for a desk for awhile for her new apartment.  Since she couldn’t make it to the luncheon to bid on the desk I had refinished, we had talked about finding another desk to work on.  She found a desk she liked online but it was waaaay expensive, mostly because it was covered in ostrich leather.  I told her that I didn’t have experience covering desks with ostrich leather but could probably work something out with paint.

The hardest part of my job sometimes is figuring out what a client has in mind.  A lot of times I will go on a consultation where  after a bit of discussion, I can figure out the picture a client has in mind.  I can then google something I have seen lately to show them that I know what they’re talking about.  That works out well.  When I have a client who says “I have no idea what I want.  What do you think?” I know it’s going to be a long meeting.   So having a starting point with a picture was great.

The first order of business was to find a desk.  Something simple with a few top drawers maybe but still open and light.  Luckily I found exactly what I needed on Craiglist.  I sent her the link, she gave me the ok and I was off to pick it up the next day.  Sometimes things just work out.

So this is where we started. 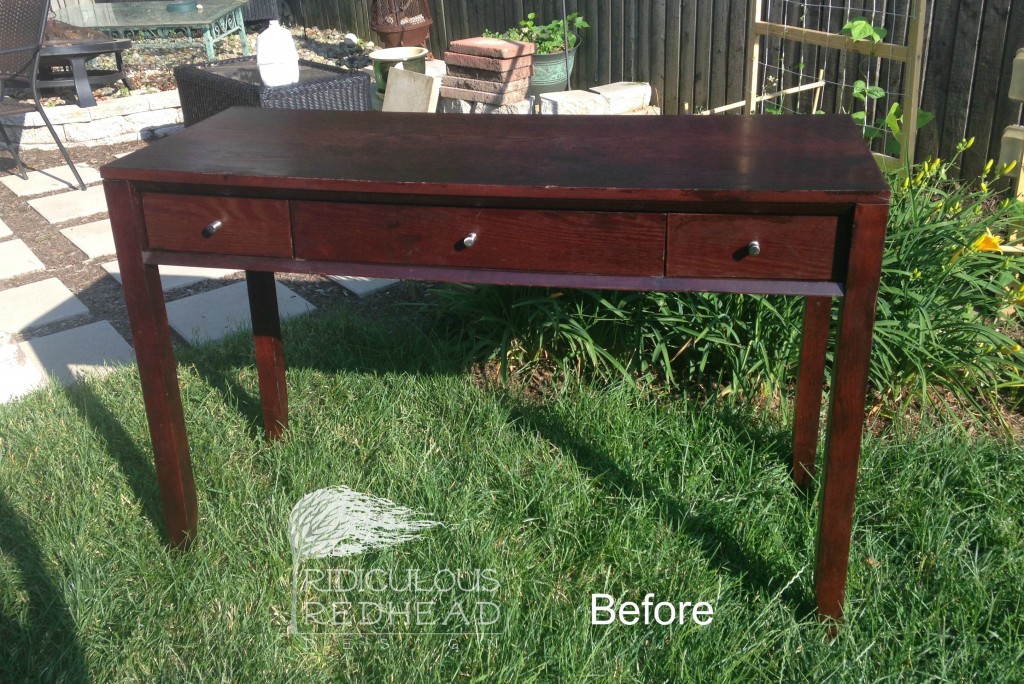 When I went to pick it up, there was a slight wiggle.  By the time I got home and unloaded it, there was a lot of wiggle.  TB kind of looked at me like I was crazy (I get that look A LOT) for bringing home a desk like his.  I guess the vibration of the truck on the way home loosened everything up.  It really was good I found out right away so we could fix it before I didn’t any painting.  TB took pity on me and fixed everything with new glue and wood pegs and clamps.  Now this desk is solid.

Here is the after. 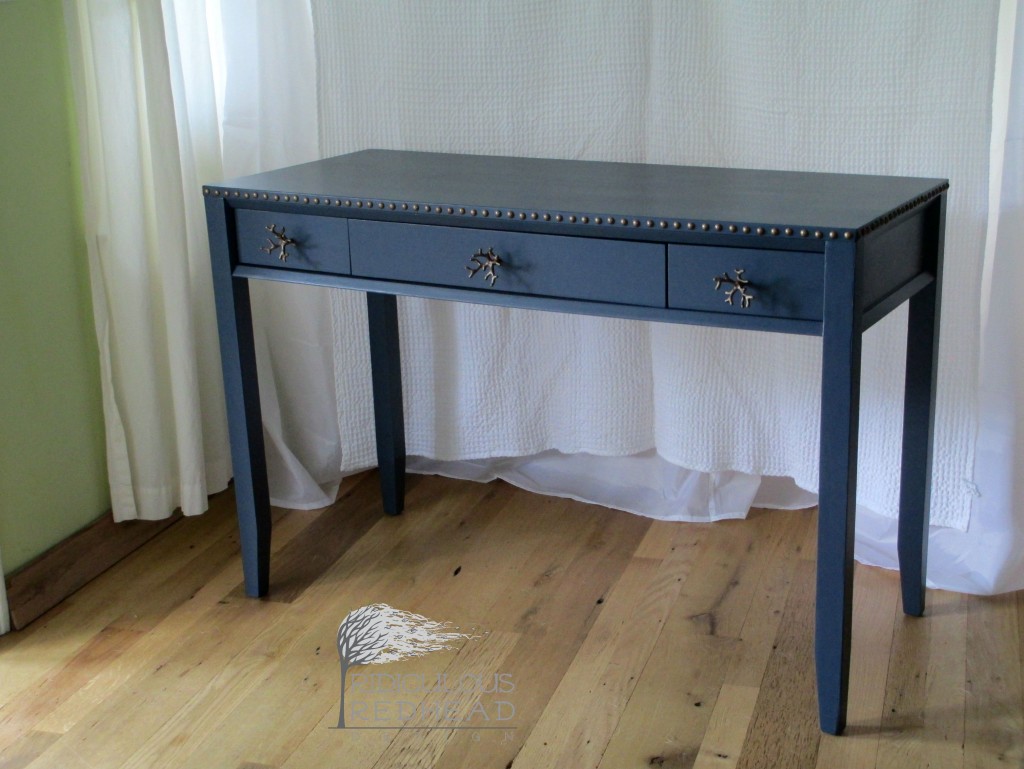 Dori is in fashion and I have to say working with someone who understands color and design is so nice.  She picked out a beautiful navy color and I have wanted to paint something navy lately!  Her inspiration desk had tons of nail head trim around the edges and legs but she opted just for a row around the top.  I think more would have been too much.  The drawer pulls are a coral design in an antiqued gold to match the nail heads. 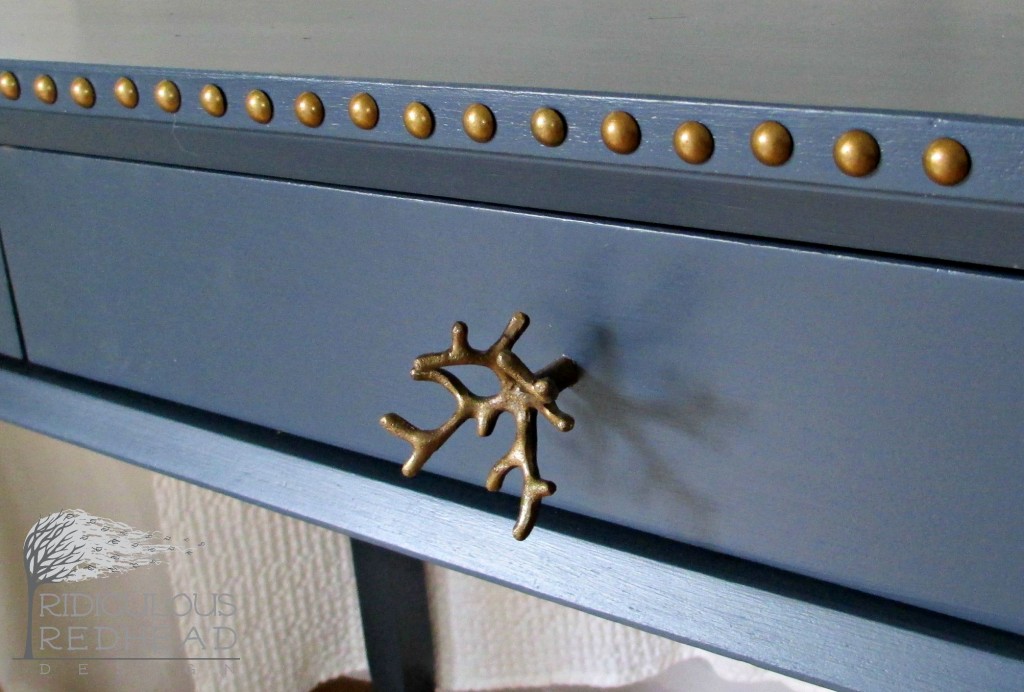 For the nail head trim, I tried to make a jig to easily space everything out of both a wood strip and a plastic scraper.  Neither worked.  So I put Frog Tape along the edge and marked out the spacing.  I wanted to make sure I had done the math correctly before I started putting holes in everything.  Then once things were marked out, I put the nails part way in, ripped off the tape then hammered them the rest of the way in.  I’m sure there is an easier way to do this, and if you know it, please tell me in the comments.  But all in all, it works nicely. 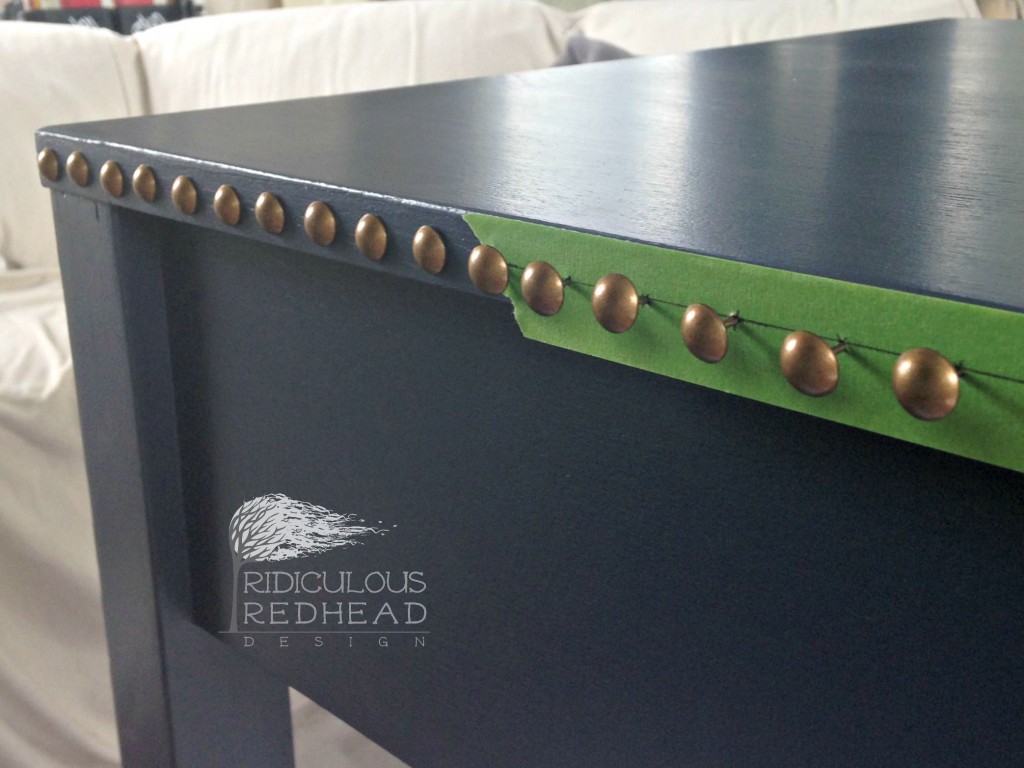 The nice thing about this desk is it looks like it has 3 simple drawers but the middle draw actually pulls down to hold a keyboard.  It’s a nice feature for someone who doesn’t have a dedicated office and wants to hid the tech. 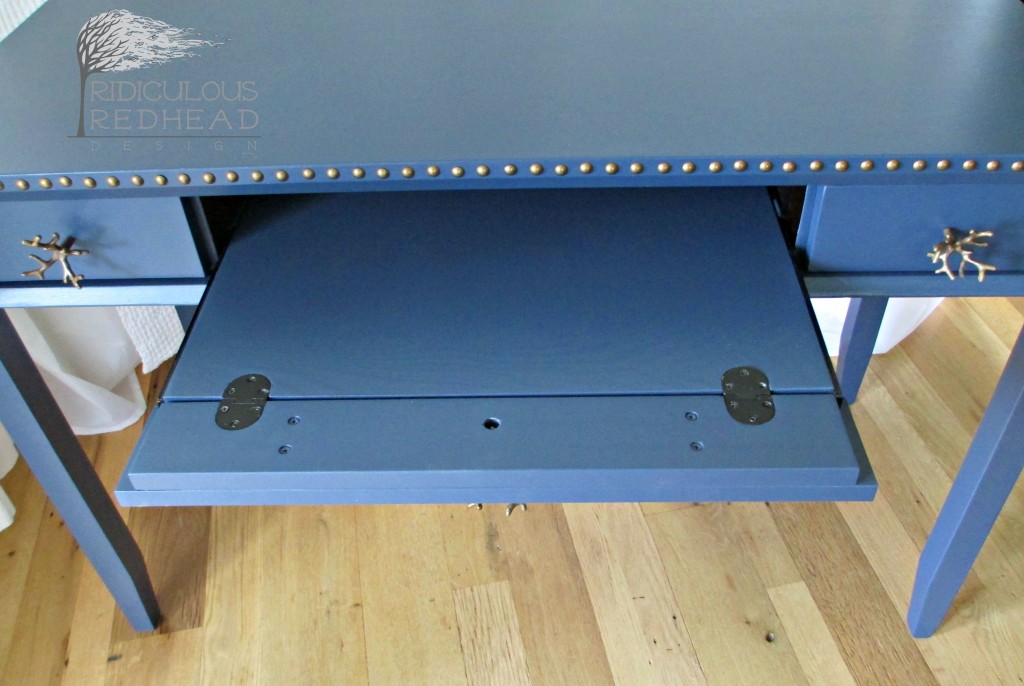 Unlike most desks, the back of this one is finished so it doesn’t need to go against a wall.  You could float this in the middle of the room if you are one of those people that hates working while staring at a wall. 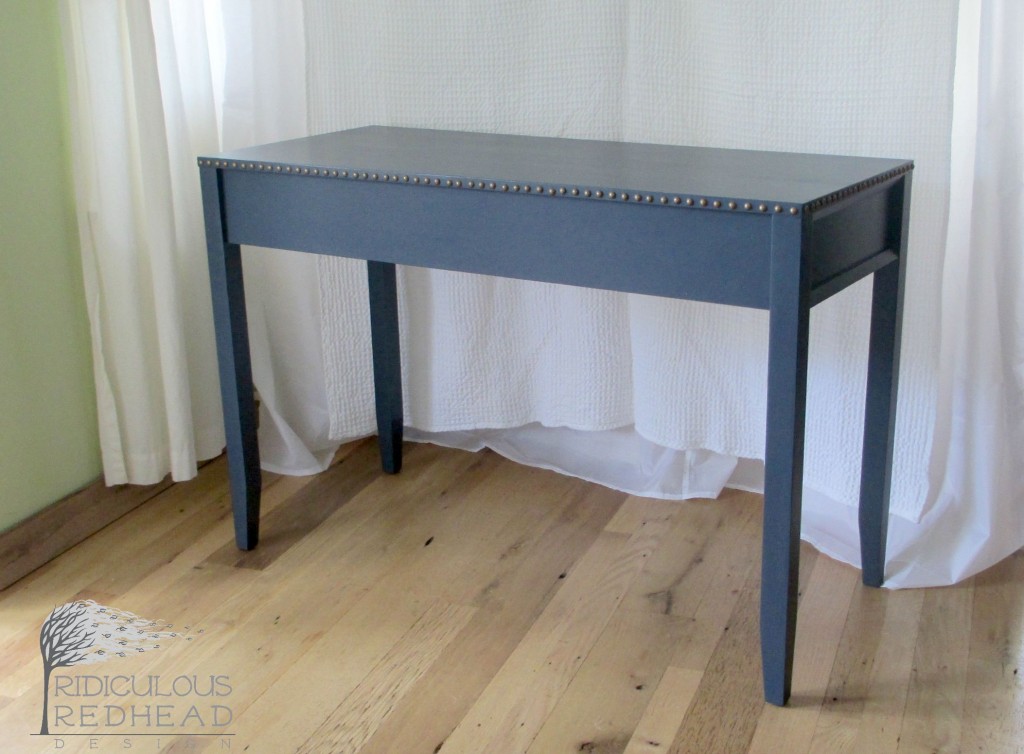 If you have an idea for a project and need some help find a piece or refinishing something, send me an email!  I love searching for just the right piece for a project.