Getting more out of my small garden

The Ridiculous Redhead > Garden > Getting more out of my small garden

I have been working on so many new things in the garden this year.  I am growing new things, in new ways.  I have also started the crazy train that is canning and preserving.  I have taken about a million photos while out in my garden to share with you and now maybe I can get them all on here.

This year I have tried to focus on using my tiny property to it’s maximum benefit.  We live on a 50′ x 100′ lot which includes a house and a driveway.  That doesn’t leave a lot of room for gardeing, or so I have thought so far.  Since I am banned from tearing up our front lawn for more garden space, I have had to be a bit more resourceful.

So far the plan has been to “edge” the garden beds to make them look nice while actually making them bigger a little bit at a time.  But this only goes so far.  Next was to cut out a little garden here or there next to a fence that wouldn’t be a bother.  Mostly I needed to leave the grass in the back yard for the dog and kid and the grass in the front so Brian could mow and have a quiet hour away from all the rest of us.  Then I moved a bunch of things, mostly the small trees from the Arbor Day Foundation, to huge pots that line my patio.

But the biggest change to my garden in the last year or two is adding more edible landscaping.  Basically instead of growing some old plants I didn’t like, I replaced then with new edible plants.  So instead of daisies (which got moved somewhere they would actually fit) I planted sweet pickle peppers.  They look like those old fashioned Christmas lights and are a small bush variety.  They add a bit of color without taking over everything.

Instead of beautiful climbing flowers, how about beautiful climbing flowers that produce beans?  These are Scarlet Runner Beans with these great big red flowers that bees and hummingbirds love.  There is always some kind of pollinator excited about the pollen in these whenever I walk by.  If you look closely you will see the green pods starting to grow. 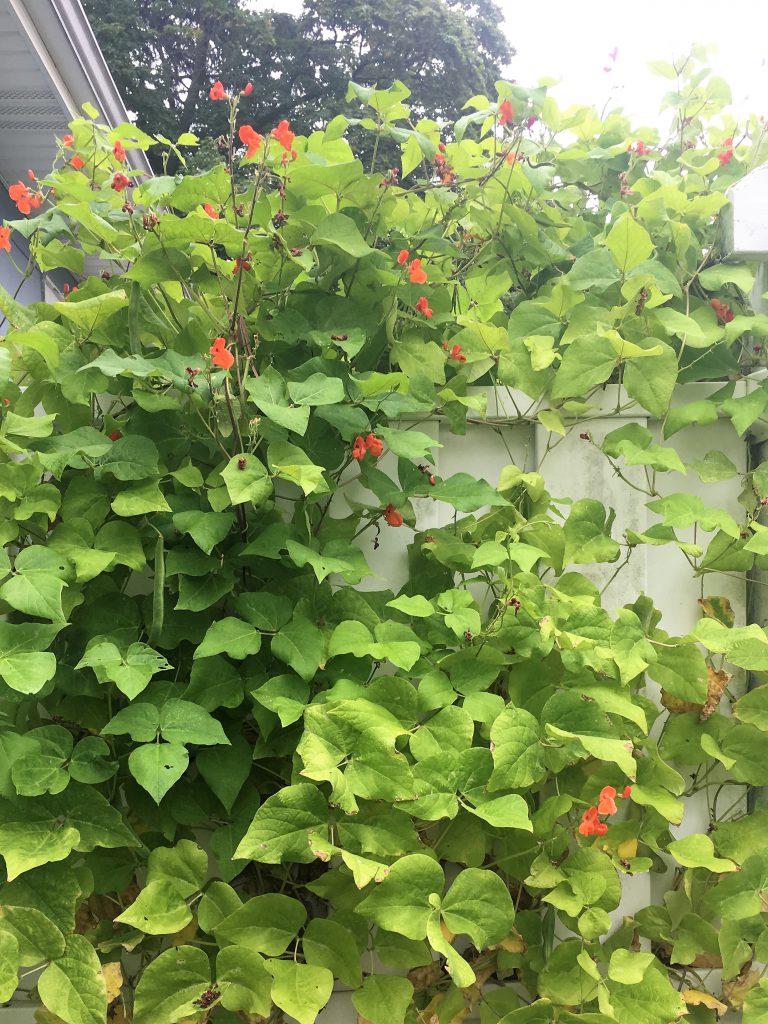 I also have moved things around a bit and let some things come out from behind the gated raised beds.  Cucumbers have been an easy growing vegetable here.   Since they didn’t really need to be behind a fence, I moved them out into another garden bed and put them on display.  The trellis is made from some bamboo poles a friend cut for me from his yard (people who plant bamboo always have enough poles to share) and some string.  It’s about 8 feet tall and gives a lot of air circulation.  But you know, it’s just pretty.  And it also grows a big vine and lots of cucs in maybe a 2′ x 2′ spot.  The flowers in front are nasturtiums (see more on them below) which gives a buffer zone so the dog can’t pee on the cucs. 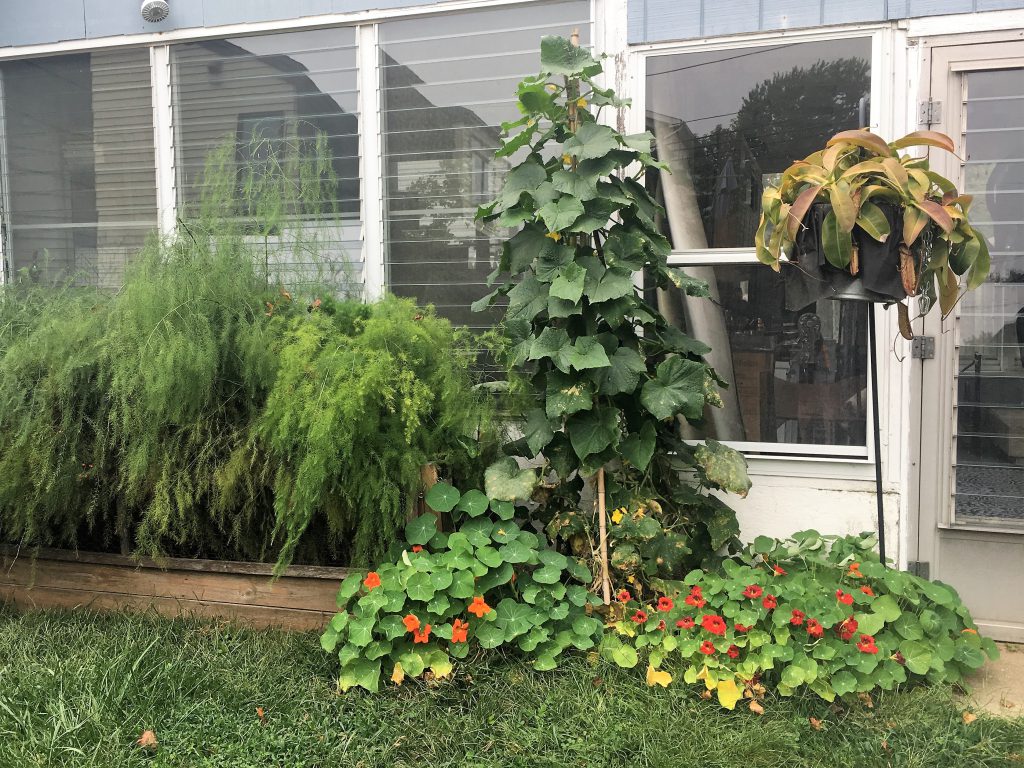 I used a smaller trellis like this one for the peas in the spring with the same idea of letting them be a beautiful focal point.  For the record the seed pack says they will get to 24″ – 28″.  This trellis is 4 feet tall.  And yes they are growing well beyond that.  Organic compost people! 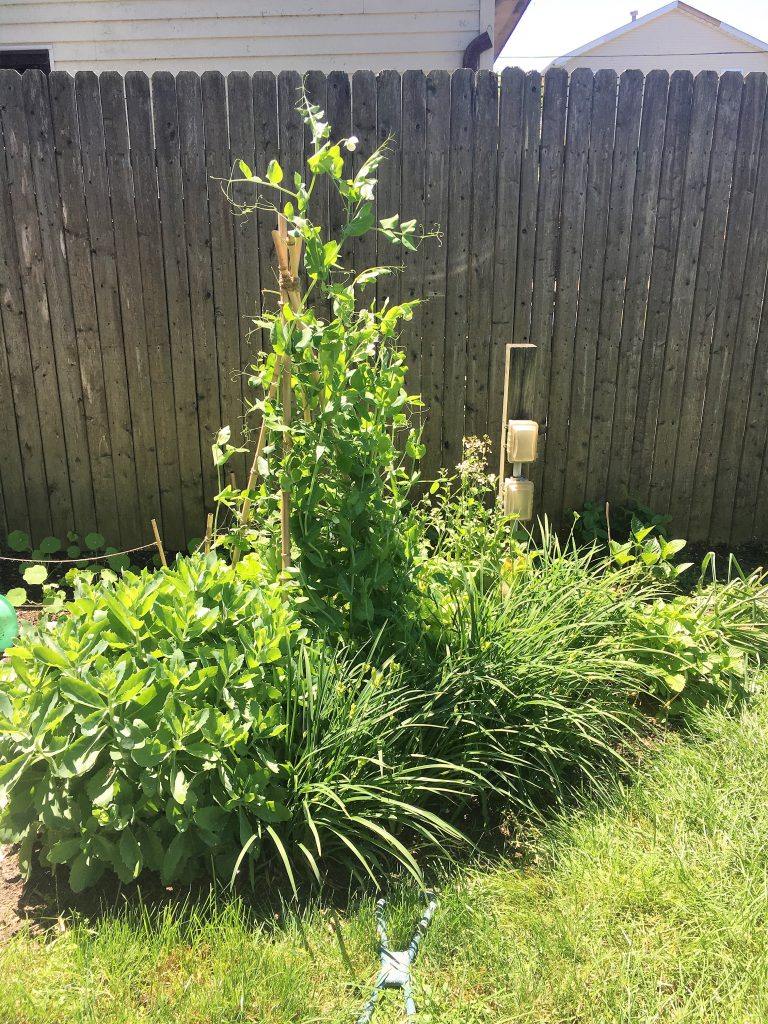 Don’t think that I have forgotten about flowers.  There is a simple formula in gardening: flowers + pollinators = food.  It’s so simple but crazy important. This is one of the main reasons I don’t use much of anything in my yard besides compost.  I don’t spray anything because when you do, not only do you get the “bad” bugs but you also get all the other good bugs too.  The bugs that we desperately need to make this whole gig work.  And what makes these bugs happy? Delicious flowers of course!  If you want them to come check out your cuc flowers to get them making tiny cucs, then you might want to to entice them with some nice sedums.  It’s really all just bug marketing.

One of the easiest flowers to have in the garden are sedums.   I have the autumn joy variety (I think, they came with the house) and I’m not sure you can kill them.  I had a random one pop up in my front garden this year which I can’t even tell you where it came from.  They are the first thing to pop through the ground in like March and they just started blooming in September.  It’s like there is a crazy Black Friday sale in my garden right now.  Bees and butterflies in all shapes and sizes just chowing down.  I love to see it.  And while they are there, I’m guessing they might check out some of my veggies that need a little pollination help.  Everyone is happy.

A new one for me this year are the Nasturtiums.  These are an edible flower (and leaves) that can also be decoy plants for those dumb worms that eat everything and make you curse.  I figured I would try them out and fill in some areas that could use a little pretty.  These said partial sun on the seed pack and I figured I would try them in a few places to see how it went.  So the seed pack said to have 6 – 12″ of space between each plant because these are dwarf plants.  Well.

Here is a picture of what I thought would be little mounds of pretty flowers.  They are now covering a space about 10+ feet across.  Every time something died off, it just spread and took over.  In the pic below you can see a gray paver at the bottom.  All 5 seeds were planted there in mostly shade.  I wasn’t aware that nasturtiums had 10 foot vines but I’m not complaining.  They just gently fill in and look awesome.  But it is something to think about for spacing in next year’s garden. 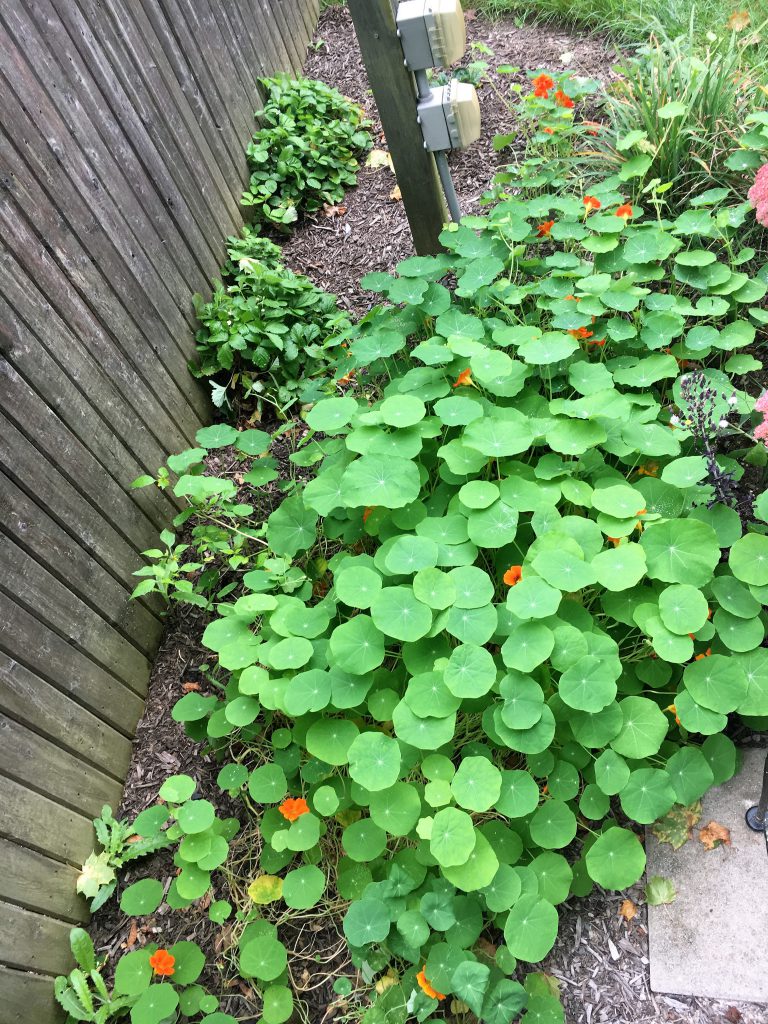 I think that adding edibles to my landscape has not only given me a much bigger harvest but my yard is so pretty!  Veggies are pretty too so show them off on the front yard stage!