Since its been a bit since we checked in with our seeds I thought I would share a little update.

Despite Opie’s best efforts, we still have tomato plants growing.  One of the best ways to make sure the plant has a solid root system before sending it out into the world is to repot the seeding deeper at least once while it’s inside.  Once the first true leaves have formed you can make a larger newspaper pot and repot the seedling, burying the stem almost up to the bottom leaves.  Tomatoes are cool in the fact that when you bury the plant deeper, roots will form all along the stem giving it a larger, more sturdy system.  Here is one after repotting a few weeks ago.

Because I had great ideas but put nothing into action, I never ended up with a grow light this year.  Since light is one of a seedling’s favorite things, not giving it enough will not give you the best results.  My plants should probably be further along by now but I have confidence some will be quick learners.  About a week and a half ago I put them outside on my sun porch.  Usually you need to harden off or acclimate seeds (more on that later), but we are have had a run of 70 degree weather with the windows open so they are fine.  They are getting a lot of sun light which has kicked things into turbo.  This pic was taken this morning and look at the tomato on the front right. Its tripled in size in a week or two. 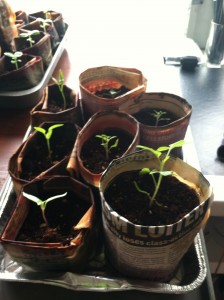 The basil is also doing well, if not still small.  It’s grown sturdy and strong and looks to do well when I put it in the garden.  Once it hits the sun all day it won’t be long until we can start making pesto. 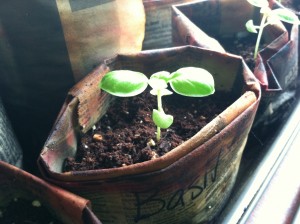 On the other hand, somethings don’t handle not having enough light very well.  Instead of the patient basil, some try to reach for the light and get tall and skinny. When they grow leaves the stems are too weak to hold them up so they fall over.  Exhibit A: 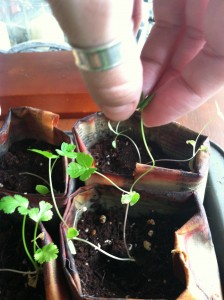 I am literally holding this plant up and it won’t make it very far in the garden.  These are parsley and they didn’t need to be started early because of a long growing season like tomatoes.  These can be restarted in pots or the garden.  I only start early so I can cook with it earlier.  My parsley sucked last year too.  Remind me of this next year when I get lazy about the grow light.

The garden is ramping up!  So exciting!  More tomorrow!