Our Adventure with Cloth Diapers

The Ridiculous Redhead > Green Baby > Our Adventure with Cloth Diapers

On the crunchy spectrum I think I am probably middle of the road but others may disagree.  With all my talk on here of organic this or reusable that, many of you may think I pretty crunchy.  I would try to argue but since today’s topic is our use of cloth diapers I won’t get much traction. People thought I was a bit crazy when I gave up paper towels so the whole the cloth diaper thing isn’t helping that opinion.

While I was still pregnant I read a lot about cloth diapers and really wanted to try them.  I wasn’t sure what I was getting into and the biggest problem I saw was the upfront cost to buy a bunch.  They aren’t cheap but since you only buy them once and use them for years, you save money in the long run.  Since I was putting together a never ending list of all the things that needed to be bought I procrastinated on this.  I figured I could ease my way in once he got here and skip over the newborn stage of diapers.

Well once the kid got here it was kind of a whirlwind so he was about 4 months old when I started trying to figure it out.  I had wanted to try cloth through a diaper rental but they were only for newborns and now he was too big!  Jenn at Earthy Crunchy Mama helped me find a few different styles and kinds to let me try out so I knew what I wanted before spending a ton.  I think this is very important.  I totally thought I was going to like one kind and ended up wanted a bunch of another.  You can always resell them but not at full price, so start small.

On the other hand, reselling can be a gain if you are the buyer.  I scoured Craigslist for awhile and as luck would have it there was a woman who bought a big stash of name brand diapers that she barely used.  Her family wasn’t into it so she was selling them for about 75% off.  That meant I could try out a bunch of different kinds to see what I liked.

Let me just say that I kind of thought I was going to have to be a martyr on this one.  I thought it was going to be something I knew I wanted to use, was good for the baby and the environment but that I was going to think was a huge chore.  After more than six months I can happily say that is not the case!  Our experience with disposable diapers was awful.  Luckily he didn’t end up with rashes (from the chemicals & plastics) but they weren’t great at holding things in.  And that’s kind of their whole job.  Overnight not only would the diaper be soaked, but his pjs, his swaddle and the sheets would be soaked too.  Every morning.  Then there was the lovely part with the poop blowouts.  At least twice a week I would have a tiny child covered from tush to neck in poop.  Getting a poop covered onesie over someone’s head without getting poop in their ears is a gross challenge.  So you see I was dealing with a lot of laundry and touching poop more than I would have really preferred.

Since we switched to cloth, and figured out what worked, none of that mess has happened.  He wakes up every morning with dry clothes and sheets and I have yet to have a poop blowout.  The only time we have any leaks is when TB and I completely space and look at each other saying “but I thought you changed him?”  My point is that people get grossed out that cloth is a lot of messy work but in my experience it’s exactly the opposite!

There are entire websites dedicated to info on cloth diapers so I will let you explore some of the links below that have helped me.  And feel free to ask me any questions you may have.  It’s a bit overwhelming at first, especially with all these moms with their cloth diaper slang (“fluff” for example) so I have put together a few of the basic types for you to start with.  I get a lot of comments referring to the old cloth diapers with the plastic pants and these couldn’t be further from that.  Most people are completely shocked to see what modern cloth diapers look like.

First up is the All in One Diaper or AIO.  It has a PUL (waterproof fabric) outside with the inside absorbent layers sewn in. You use it once then throw the whole thing in the wash.  They are most like a disposable diaper but aren’t as customizable and take longer to dry.  This one is from Thirsties and is a small size although it does have the snaps that shorten up the front to make it smaller. 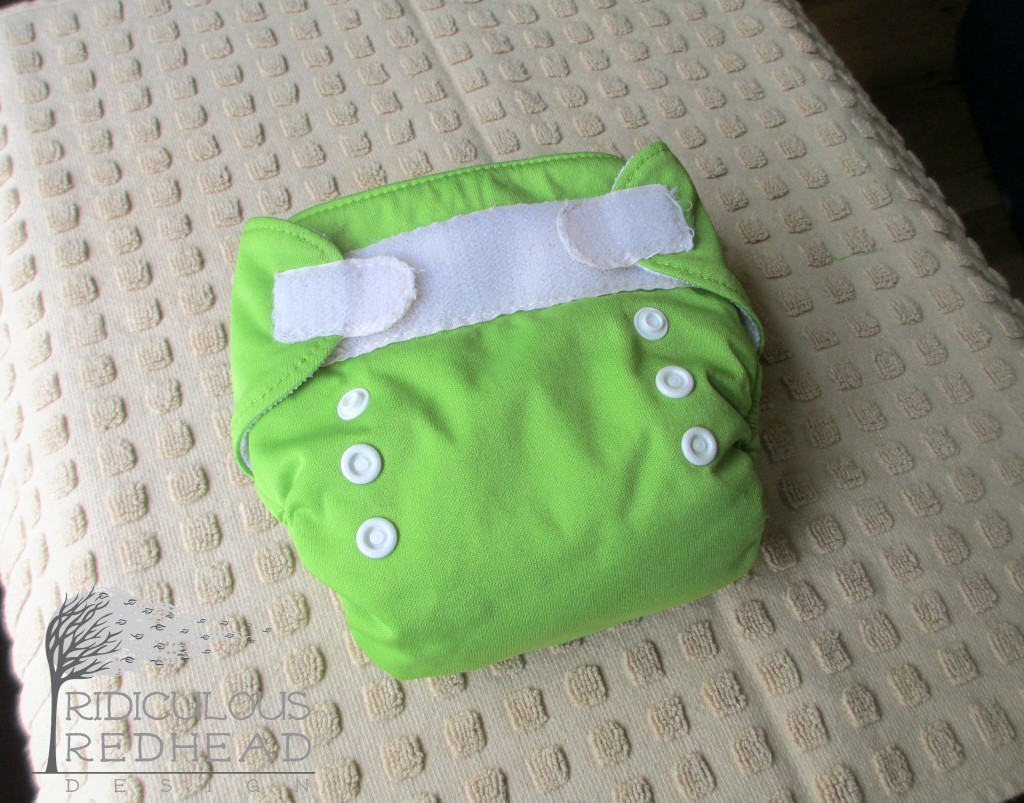 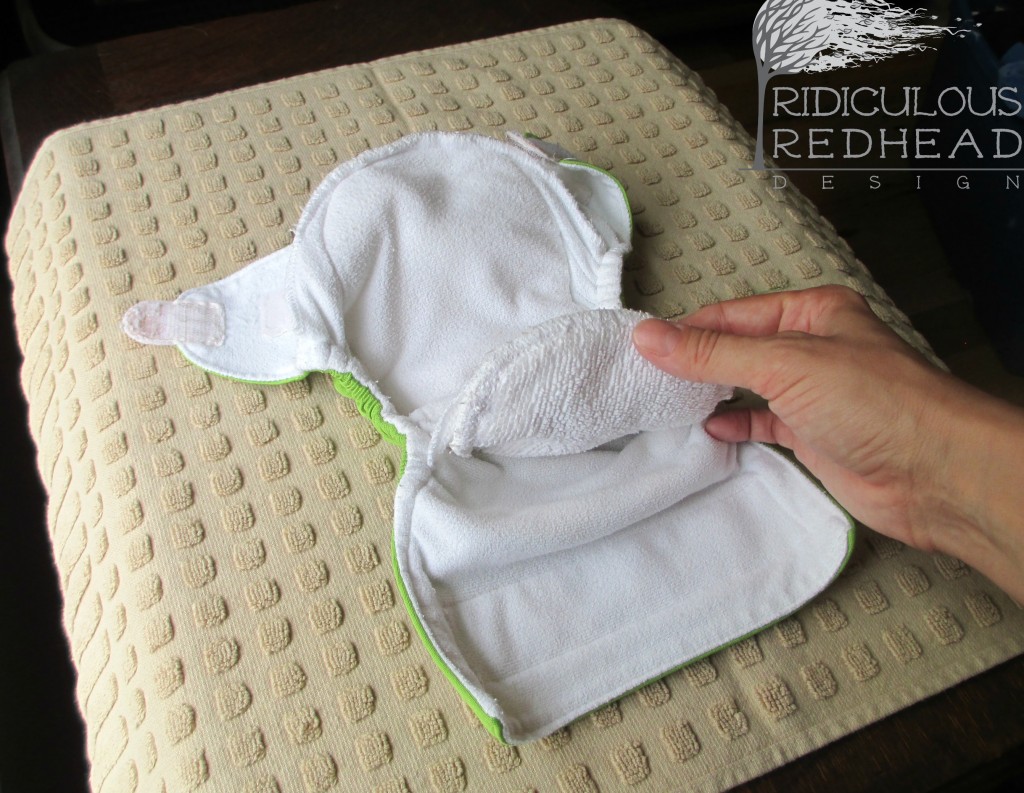 Next is the Pocket Diaper.  This one has the same outer PUL fabric but with only a layer of microfleece sewn on as a pocket.  These require some kind of absorbent layer inserted into the pocket which makes them very customizable and quicker to dry.  The downside is you have to stuff each one with the insert.  Most of mine fall into this category.  The one below is from Apple Cheeks in a size small (you can see there are no adjustable snaps on this one) with a Loopydo insert. 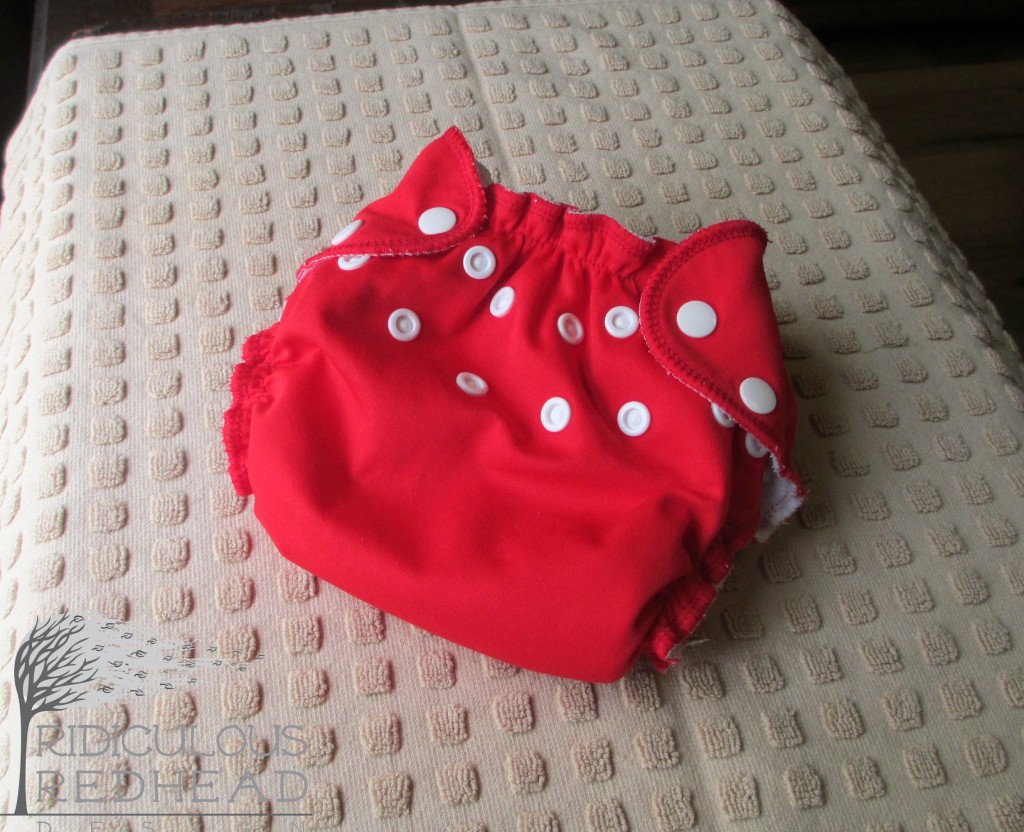 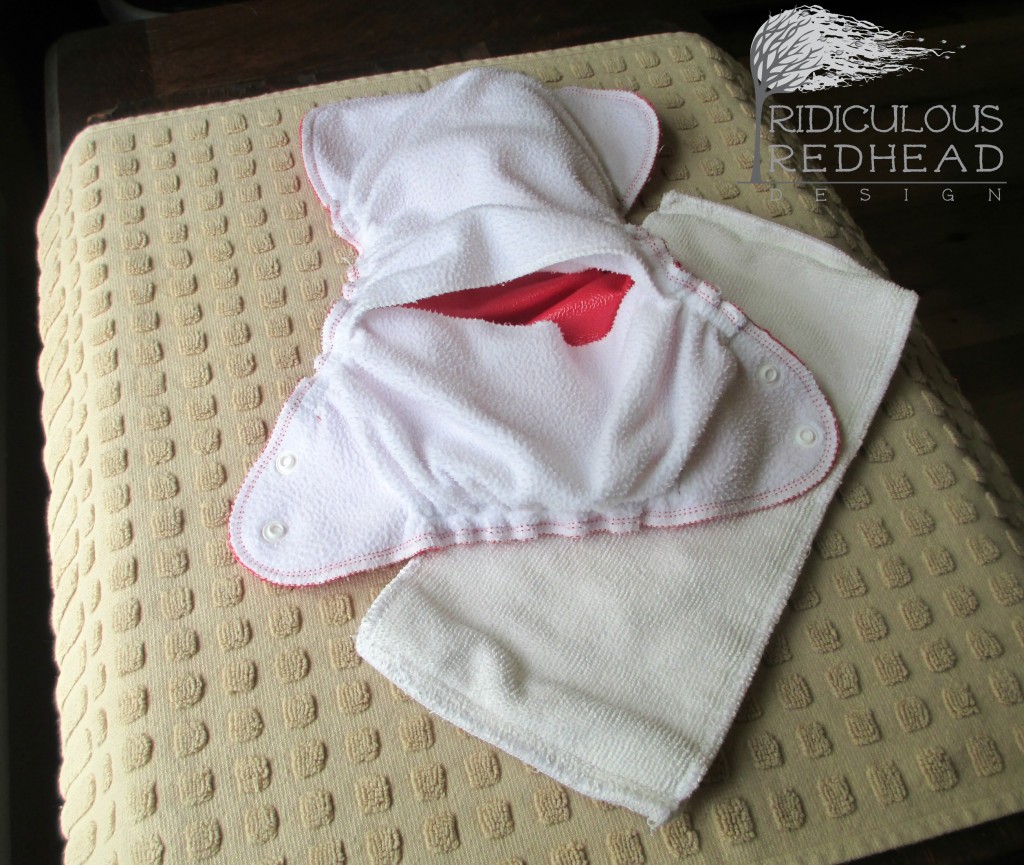 The next kind is the Cloth Diaper Cover.   This has the same outside PUL fabric but nothing is sewn in.  These can be air dried in between changes and used over and over with new inserts (unless you get poop on them, then wash them because, yuck.)  These are typically more affordable since you can buy only a few covers and lots of inserts and have a nice stash.  These are easy to wash and quick to dry but can look scary to newbies and babysitting family.  You will also notice that most diapers have a choice of velcro or snaps.  Velcro can be easier (and more like disposables) for adults but they are also easier for two year olds to get off.  Plus velcro is really loud and when you have to change a baby that you just rocked forever and it wakes that baby up, you may wish you had quieter snaps. 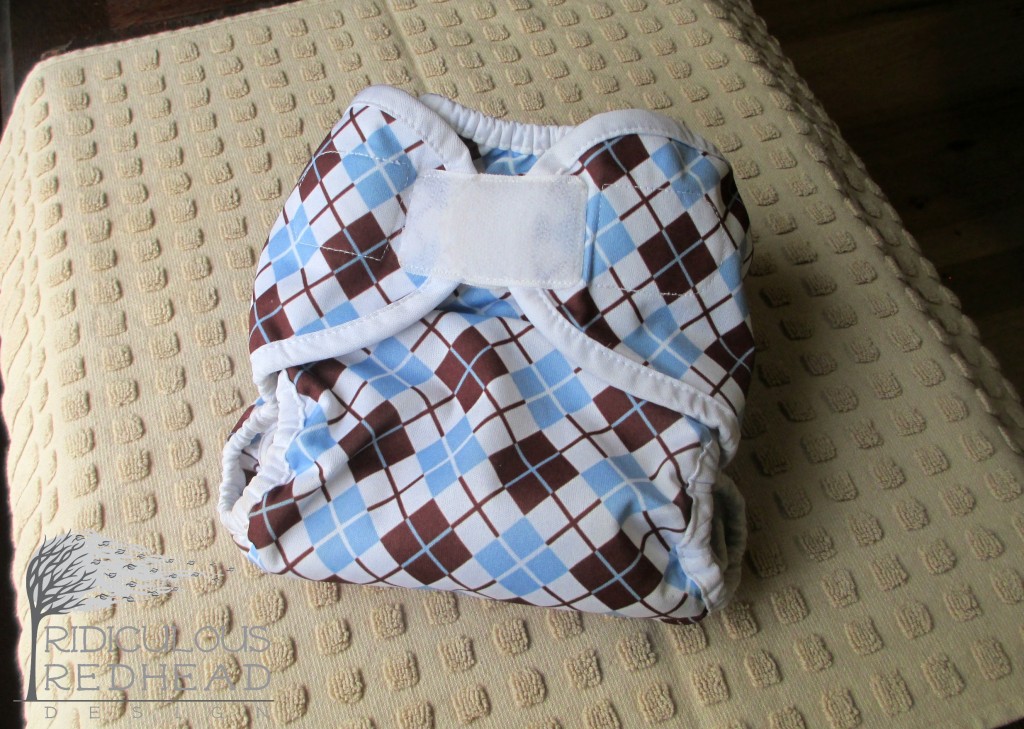 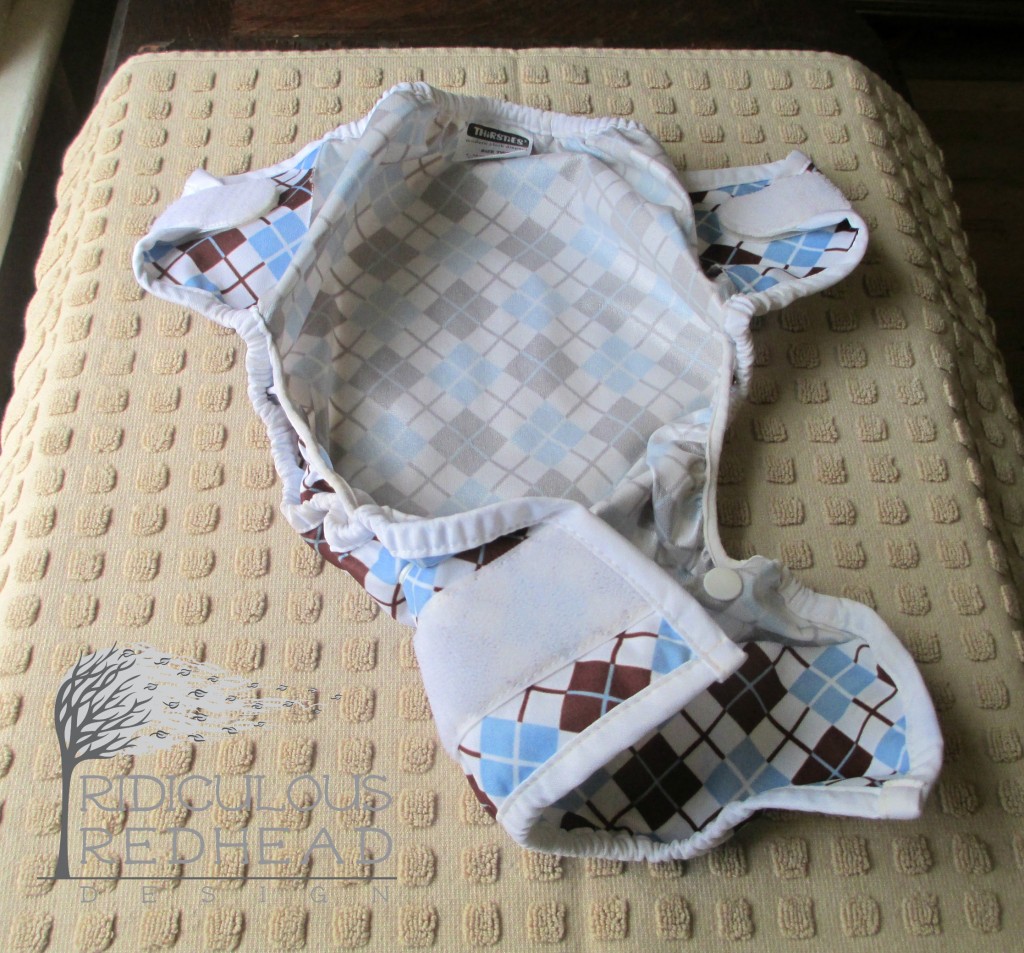 You need to stuff most of these with something and there are a ton of choices. Below we have from left to right: 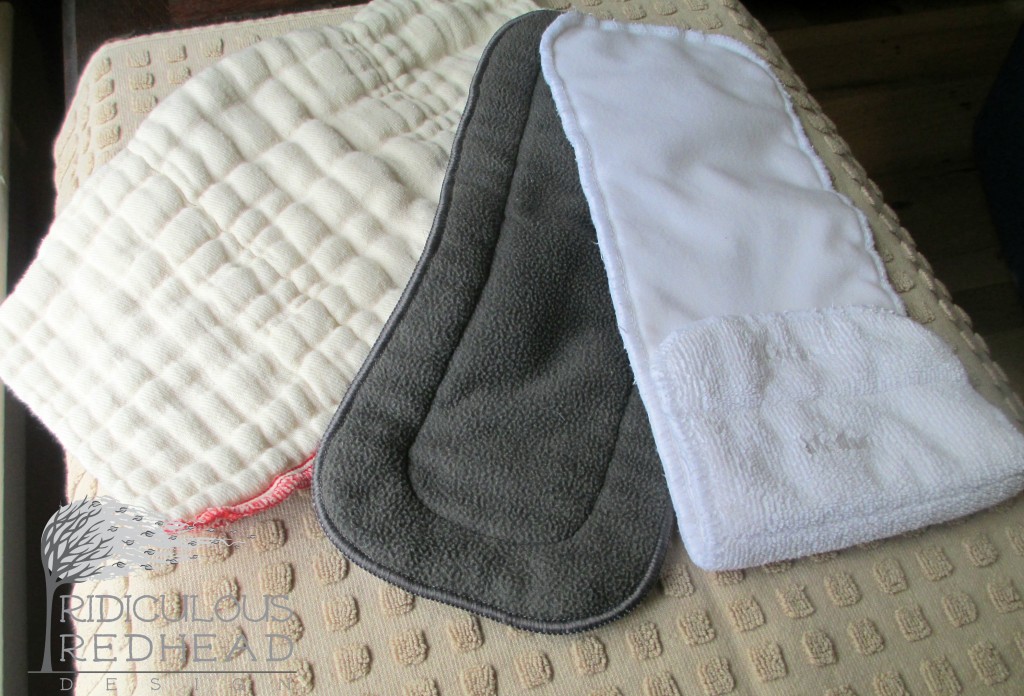 This biggest question I get asked is “What do you do with the poop?”

(Seriously these are the conversations I am now having with strangers.  No one cares now that I am up on current events because TB has me listening to a lot of NPR, or as I refer to it Nerd 101.)

This is a whole other topic in itself but the basics are either a diaper sprayer or liners.  Diaper sprayers look like the sprayer on your kitchen sink but it hooks to the plumbing of your toilet.  You spray the mess off the diaper and then throw it in your wet bag until you are ready to wash.  Liners can be disposable or cloth.  I couldn’t see the point of paying for disposables when I was using cloth so I bought a yard of microfleece from a diaper making supply store (yes they exist) and cut up some rectangles with no sewing required.  The listing said it was white.  The label on the fabric when it arrived said it was white.  As you can see, it is yellow.  It’s getting pooped on so I figured it doesn’t really matter.   With these I just kind of dump the poop off into the toilet and wash.  I don’t have any stains and the liners are probably why. 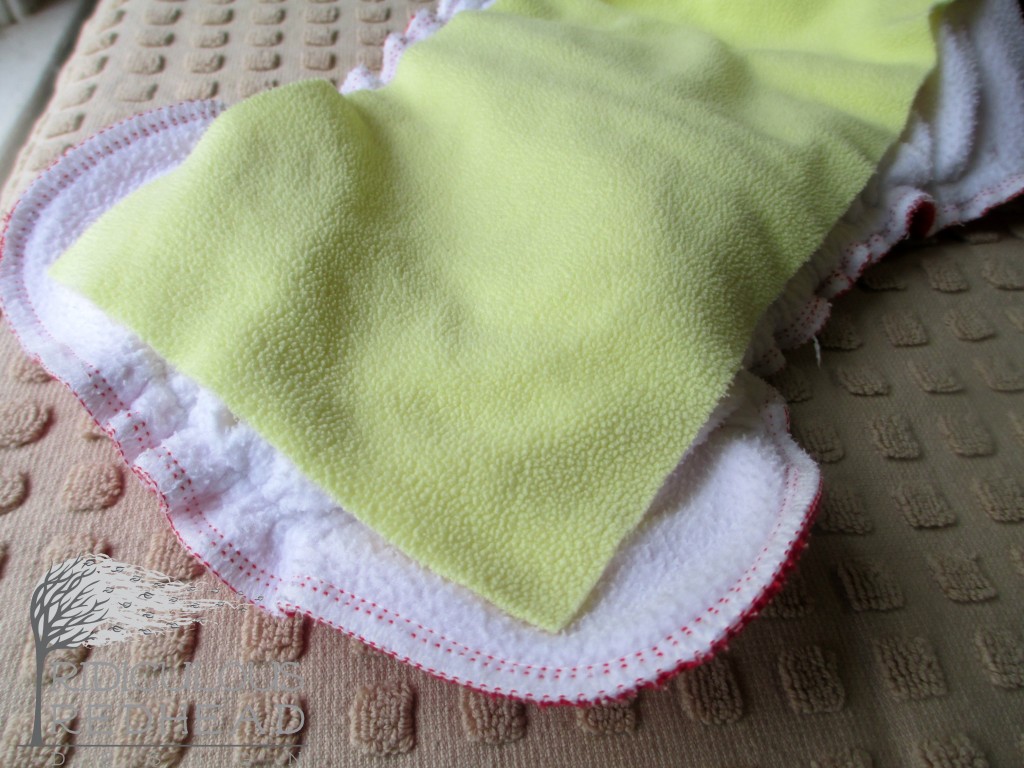 Before this post turns into War and Peace, let’s go back to the wet bag I just mentioned. While you are waiting for a load of diapers to wash, you will store your dirty ones in a wet bag.  These are usually made out of the same PUL fabric as the outside of the diapers and can be small for travel or large for the nursery.  I know you would think to close them up tight but air is really your friend here and will keep funk to a minimum.  In fact unless you are have issues with stink in your diapers, your wet bag shouldn’t smell much at all.

The first picture is of one of our small wet bags for travel.   The second picture is of the large wet bag on the left in a open weave hamper. The hamper on the right is for his dirty laundry. 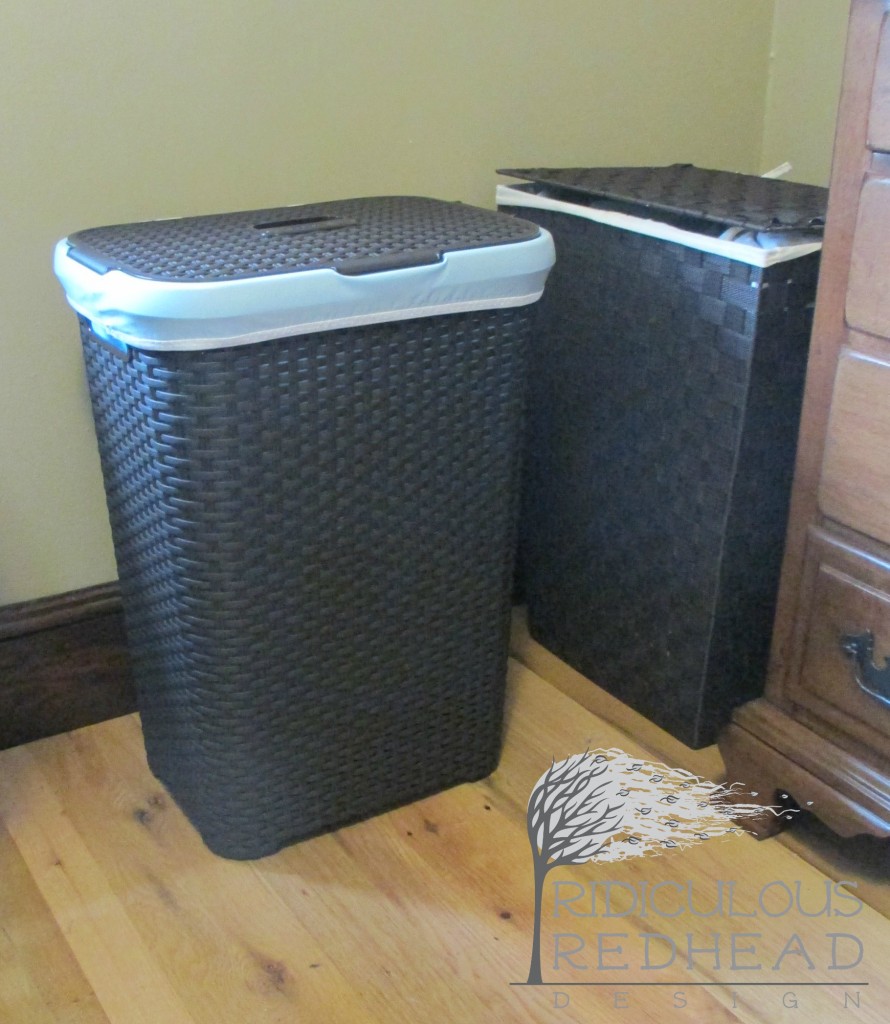 So there is my very basic info on my cloth diapers. If you are even the least bit interested, I would encourage you to check the list of sites out below.  And again, feel free to ask me questions!