Since we started our seeds on February 17th, they have been working very hard to become tiny little plants.  Some have had better success than others.

The funny thing I found was that while I thought I was being so careful placing only one seed in each pot, at least 8 of the pots have at least two seedings going.  There are some seeds, like beets, that come in clusters of a few seeds that you plant at once.  I don’t think any of these are like that.  I really just think I dropped some.

So here are the little darlings.

In our first tray, the row in the back is the basil.  All four pots have one strong seedling each.   You can tell basil by the cute round leaves they have in the beginning while most everyone else will look the same with more elongated leaves.  The tall gals in the center pot are the cilantro.  They went from be the late bloomers to the Bea Arthurs of the pack and they aren’t even supposed to emerge until 14-21 days.  (As you can see there are two in there, oops.)  The front row is the parsley which isn’t supposed to be up until 14-21 days (High achievers!  So proud!). Of the four pots we have doubles in three of them for a total of 7 plants.  So much for me being careful. 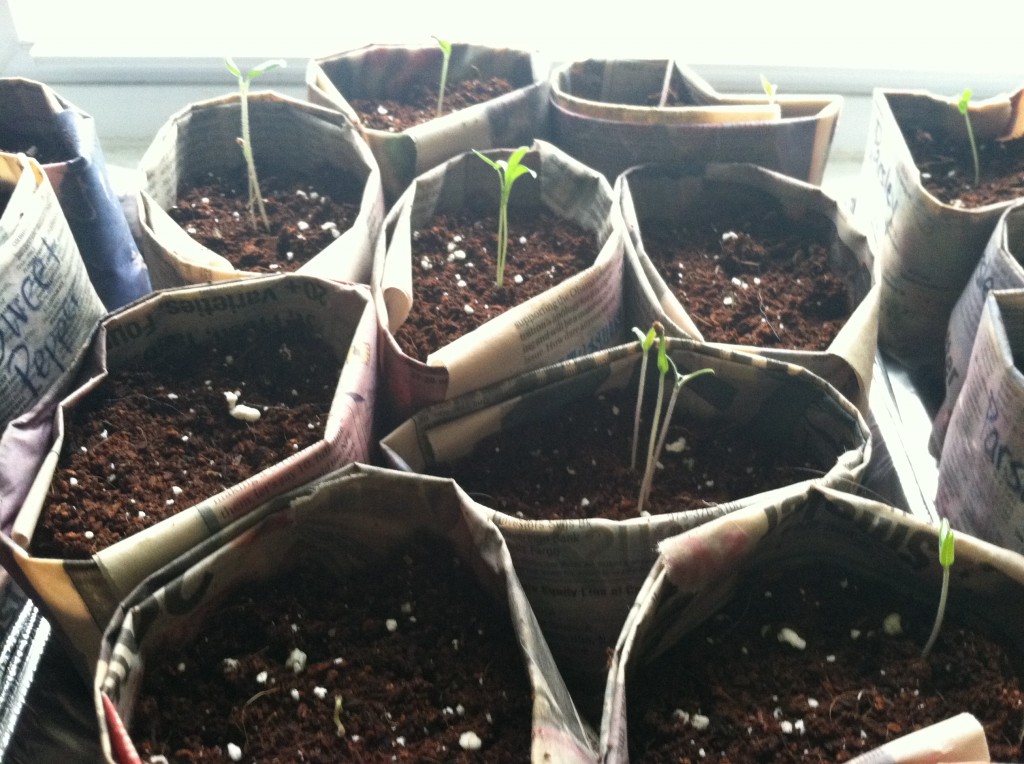 The second tray is a mixed bag of success.  The left row is the Matina tomatoes.  As you can see the two in the front haven’t done much while the back to are going strong.  It just goes to show that with the same environment you don’t always get the same result.  The right side is the Cherry Tomatoes have three out of four pots going with a tiny seedling emerging in the last one. And of course because of my butterfingers, there is the one more toward the front that has three growing quite nicely.  Again the cilantro is in the middle and doing well. 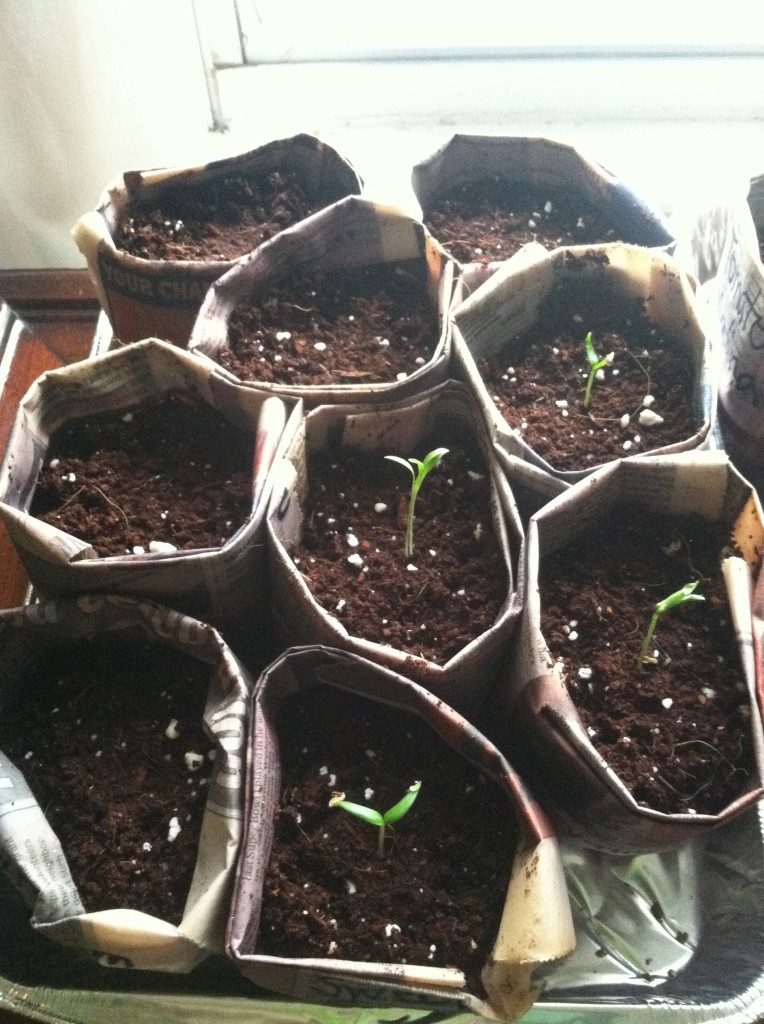 Our third tray looks bad but it’s still right on time. The right side is the sweet peppers which have 3 out 4 growing.  The middle is again two cilantro .  The left side look like duds but these are the delphinium flowers.  I began to think I had somehow pissed the seeds off and they were just refusing to grow.  I checked the back of the seed envelope with all of its information and it said seeds emerge 21-28 days after planting.  So they are not pissed, just taking their sweet time.

Currently these guys are in front of a southern facing window and seem to be doing well.  I have been thinking about getting a grow light for some supplemental light though.   On sunny days they get sunlight but not as much as they probably want and on cloudy days (like the last few around here) they don’t get any. Sunlight is very important for strong, stocky plants.  Plants that are too crowded or don’t get enough light get tall and scraggely and can’t really recover.

I am very excited about these little seedlings.  They mean spring and summer are coming.  It’s also nice to see something green and alive after a dreary winter.  And plus it shows me that for two years in a row I have started seeds without really knowing what I was doing and just fumbling through.  Sometime just staying out of natures way and letting it do its job is the best way to go.