I was told that because it was so warm this winter there was no freeze to kill things off.  Like bugs for example.  This meant that this summer would be more buggy than last year. Last year I was eaten alive every night by mosquitoes.  So what does that mean for this year?  A lot of cursing.

I went outside at 9:30 this morning with my coffee to check out my garden.  By the time I came in 10 minutes later I had bites all over my legs and shoulders.  To relieve the itching I always follow my gram’s advice to dab some dish or hand soap on the bite.  It sounds silly but it really does take the itching out right away.  It’s cheap and not full of chemicals.

With a mind for solving problems, my TB decided what we needed was a carnivorous plant, which is a plant that eats bugs.  He went to the store and got a great a pitcher plant. 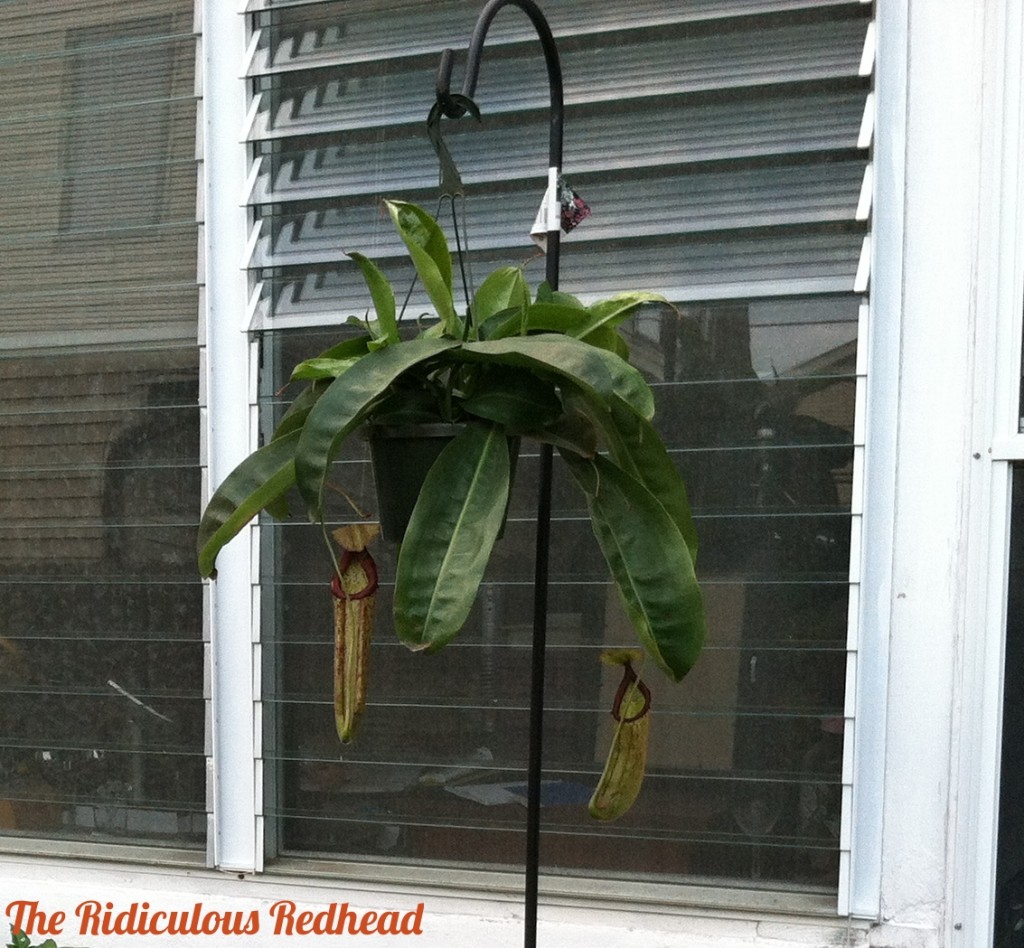 You will see the “pitcher” thingys that hand down.  The plant produces a fluid in them that attracts bugs.  Once the bugs go into the pitcher to see what smells so great, they can’t get a grip on the sides or the red edge and can’t get back out.  The fluid inside then digests the bugs.  Gross yes, but also pretty interesting.

Someone else was also attracted to the pitchers but not for the bug pheromone fluid.

Someone just likes to play with things that dangle in mid air when no one is playing with him and he is bored.

This is that someone. 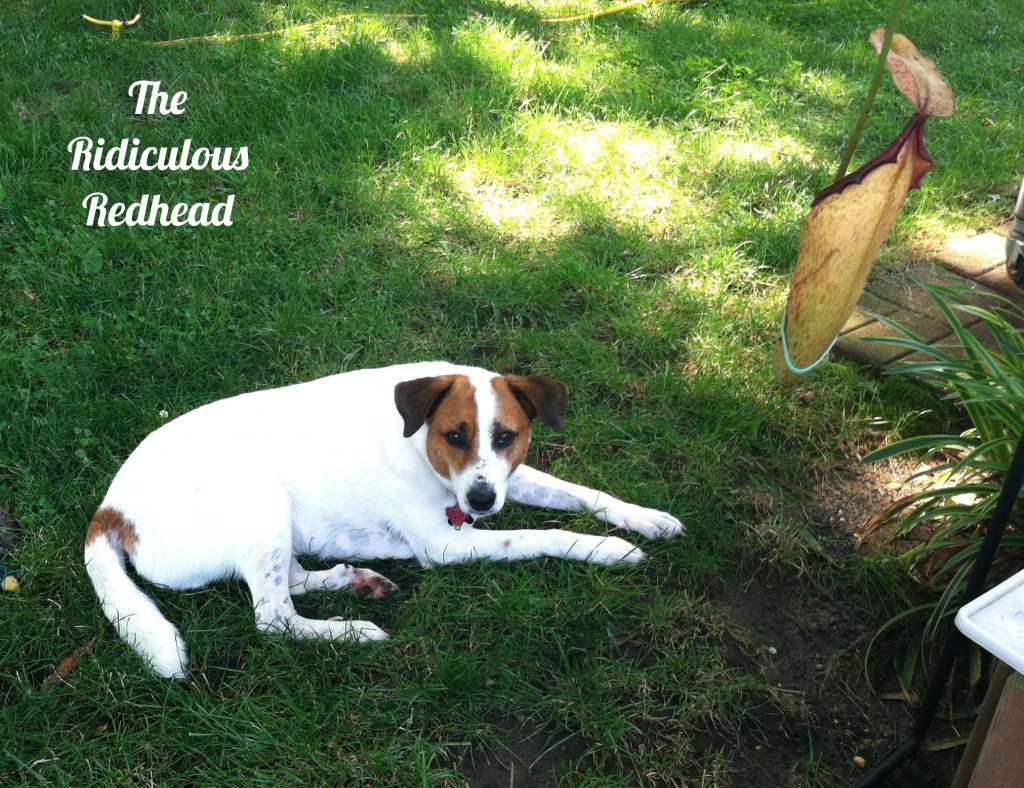 Now in Opie’s, defense these pitchers are pretty irresistible.  Even TB goes over to them all the time and looks in.  They are fascinating.   The poor guy was really just bored because his crappy parents don’t play with him constantly, every minute, all day as he would prefer.  And this plant was just asking for it.

Here is the damage.  I have added captions to help since the picture has a busy background. 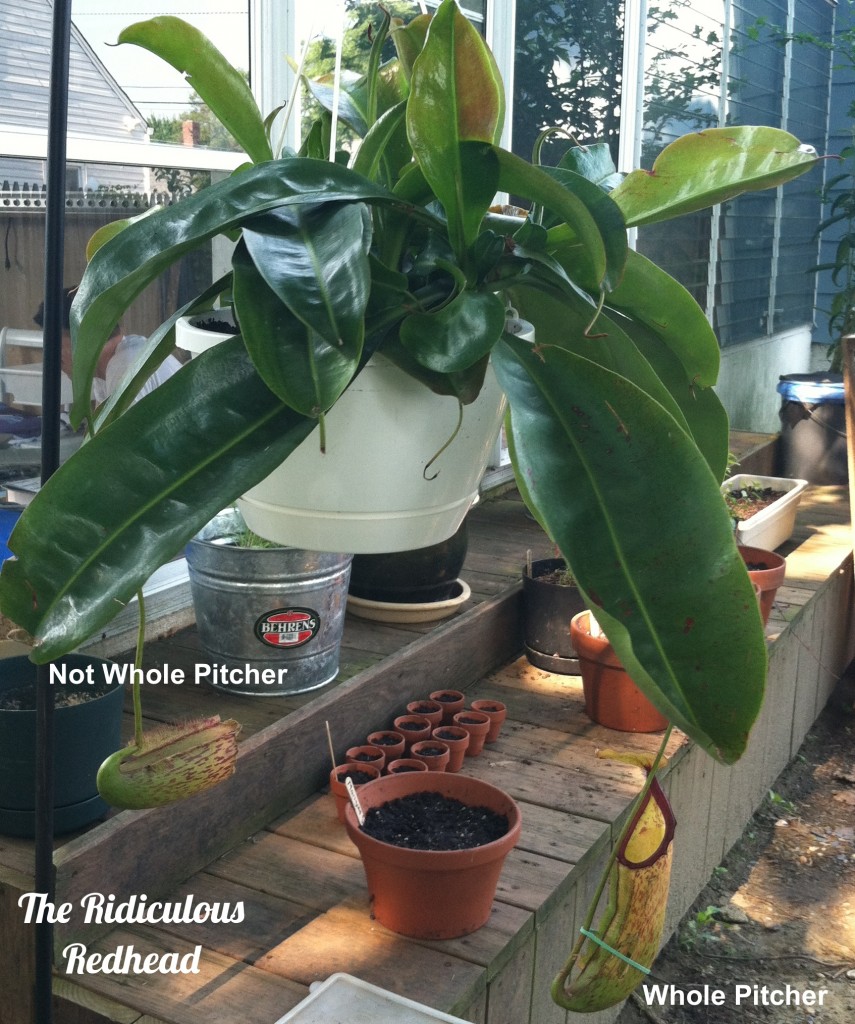 You will notice there is a half of a pitcher missing.  You will also notice that the other pitcher got knocked around and slightly stretched out so TB performed first aid with a rubber band. 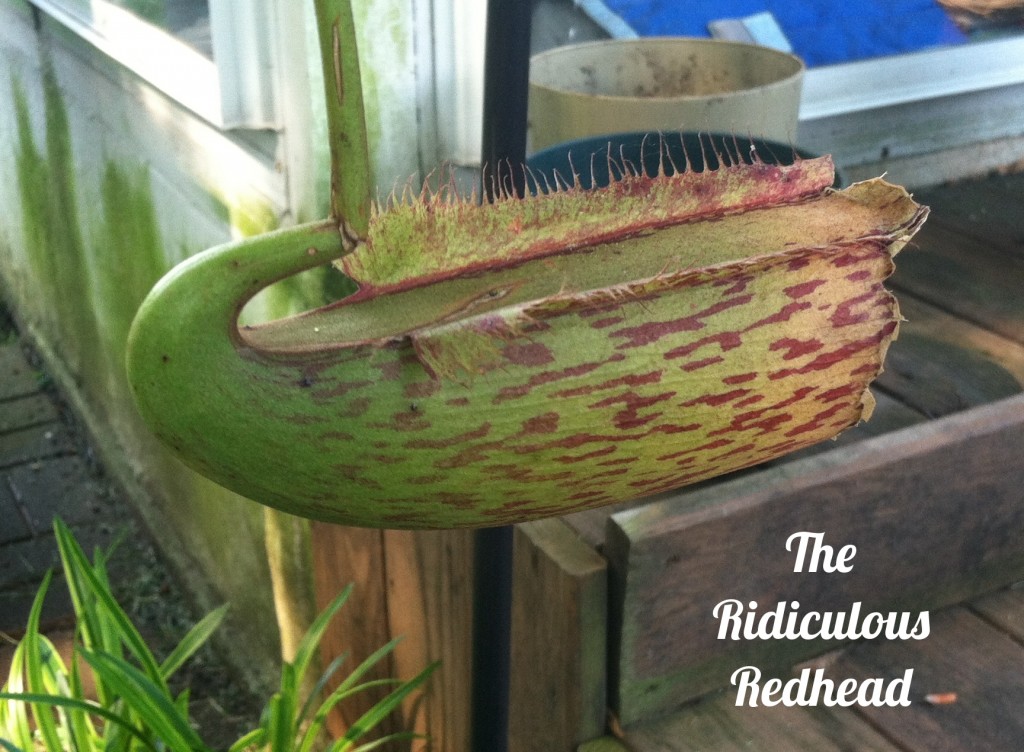 The other half of this pitcher was found clear across the yard and in pieces.  Opie is not very good at covering his tracks.

With our bug population we would have needed a forest of these things to make a dent but it was a noble try.  We are now searching for other options.  I have read that using a fan on your patio will help since mosquitoes can’t fly in strong winds.  I have also been looking at natural bug spray.  I do so much to avoid chemicals in my skin so I don’t want to have DEET all over my everyday.

If anyone has any ideas on how to not look like I have a terrible rash all summer please speak up in the comments below!