I just realized I have been really quiet about the garden this year.  I have been excited about the garden and all it’s goings on but I haven’t written much.  It’s been hard to have enough energy to do much with this pregnancy and I guess it’s fallen by the side.  I like to take pictures to show all of you my progress but standing in 100 degree heat for more than 6 seconds made me want to die.  It’s been pretty unbearable.

I have been taking pictures here and there so I figured I would do a run down of how things are going so far.

Last fall I planted both soft and hard neck garlic.  I really had no idea what that meant other than one can be braided, but who cares right?  Wrong.  Hard neck garlic produces about one of the best things to ever come out of my garden – scapes.  These are the flower stalk that shoots up the middle and curl over.  You just cut them off and leave the rest of the garlic to keep growing. Sorry for the blurry photo. 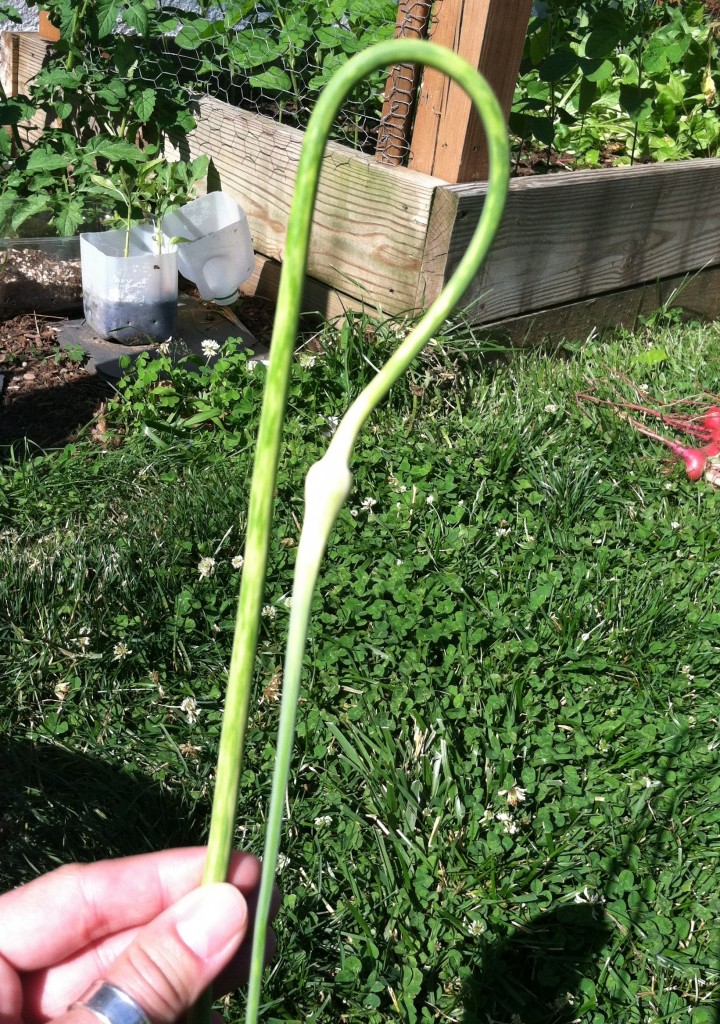 Why are they so awesome?  You can cut them up and eat them!  I recommend the Garlic Scape Pesto recipe from A Garden for the House.  It’s pretty insane and everyone who was here when I made it thought so too.  You can only get scapes around June (our farmer’s market had them too) so it’s a real treat.

Then these plants give you a second harvest with the actual garlic bulbs.  These are delicious too!  They need to be cured first for long term storage.  I thing I did a bad job with this so I will leave you to research it on your own. 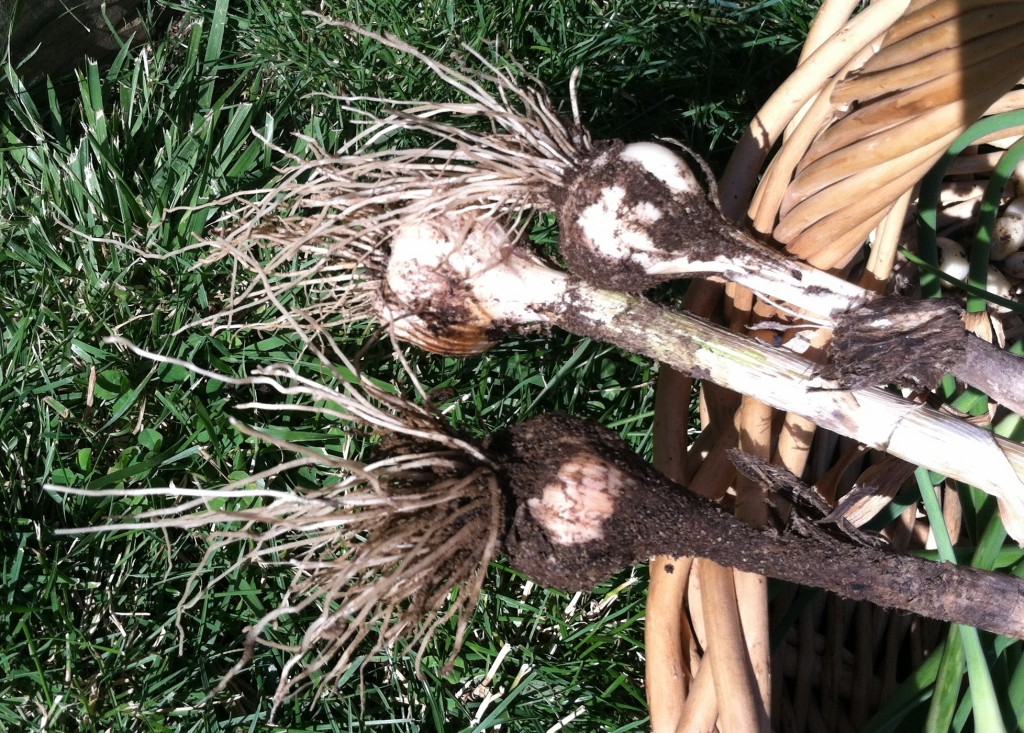 This is the first year trying shallots and I am hooked.  I have always had a bad stomach that never could handle onions.  I have found recently that shallots don’t both it so much since they are lighter.  I also came across a wonderful recipe for a Basil Cream Sauce that uses shallots too (with Shrimp, Goat Cheese ravioli although I make my own pasta instead of using the wrappers).  We planted them in the fall at the same time as the garlic and other bulbs.  The head broke down into 3 cloves so I didn’t expect much but we ended up with a ton!  These are another thing that requires curing before storage.  You need a cool dry place which in June we didn’t have.  It was either hot and damp or cool and damp.  We used some but lost a bunch that turned mushy so we will have to figure that out for next year.

I was very excited about the beet seeds we got this year.  They were chioggia beets which are red and white striped inside like a candy cane.  I had had them before from the market and were sweet and delicious. Ours grew well but they didn’t taste like anything.  I was going to try for a second fall crop by planting seeds but I thought I already have enough going on this fall.  I wish I liked beet greens so it could be a double harvest crop but they don’t do much for me. 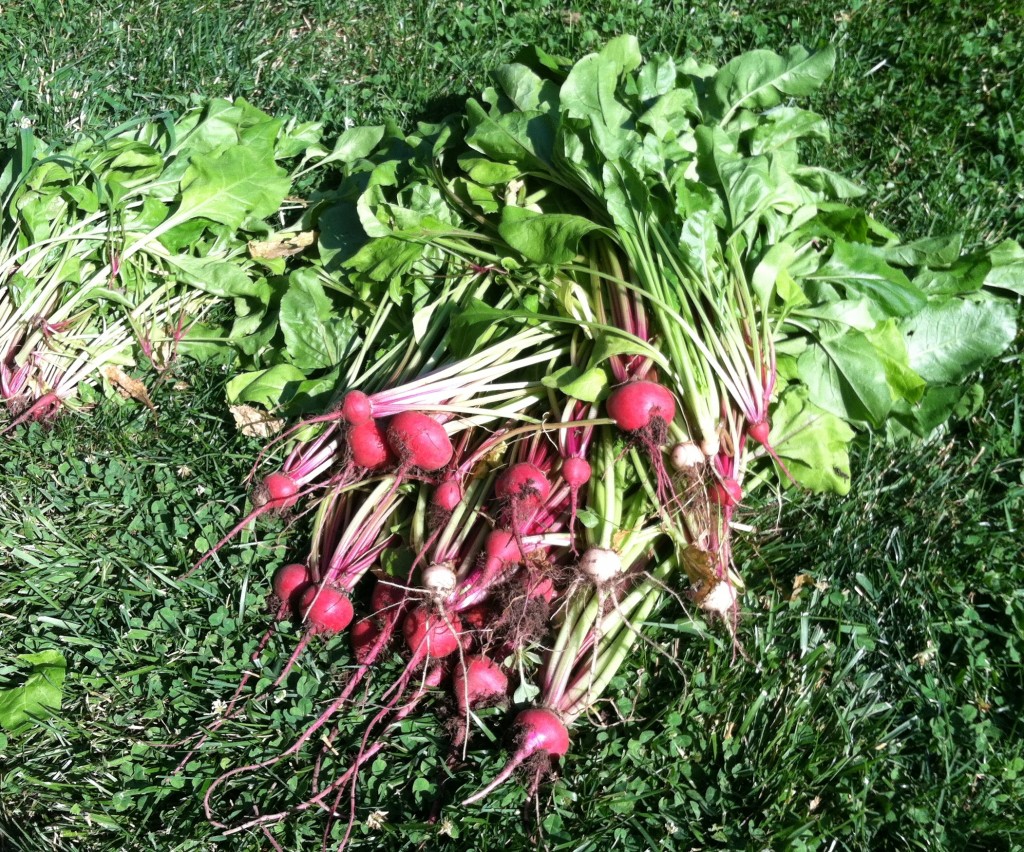 Last year I tried growing lettuce in pots because everyone said it was really easy.  I suck at growing things in pots and got about 4 leaves. (Seriously even my mint in the pot isn’t looking too good.) So this year I carved out part of a raised bed and pick a few varieties.  There was a gourmet mix, spinach, arugula and a summer bibb.  I left the salad spinner in the photo to show you just how much we had.  That bowl can fit enough for four people.  We ate a lot of lettuce and gave it away and we still wasted a lot that went to seed. It worked out well and I think planting in garden instead of pots is the way to go. (The tall things on the right are the shallots which grew happily with the lettuce. On the left are the beets.) 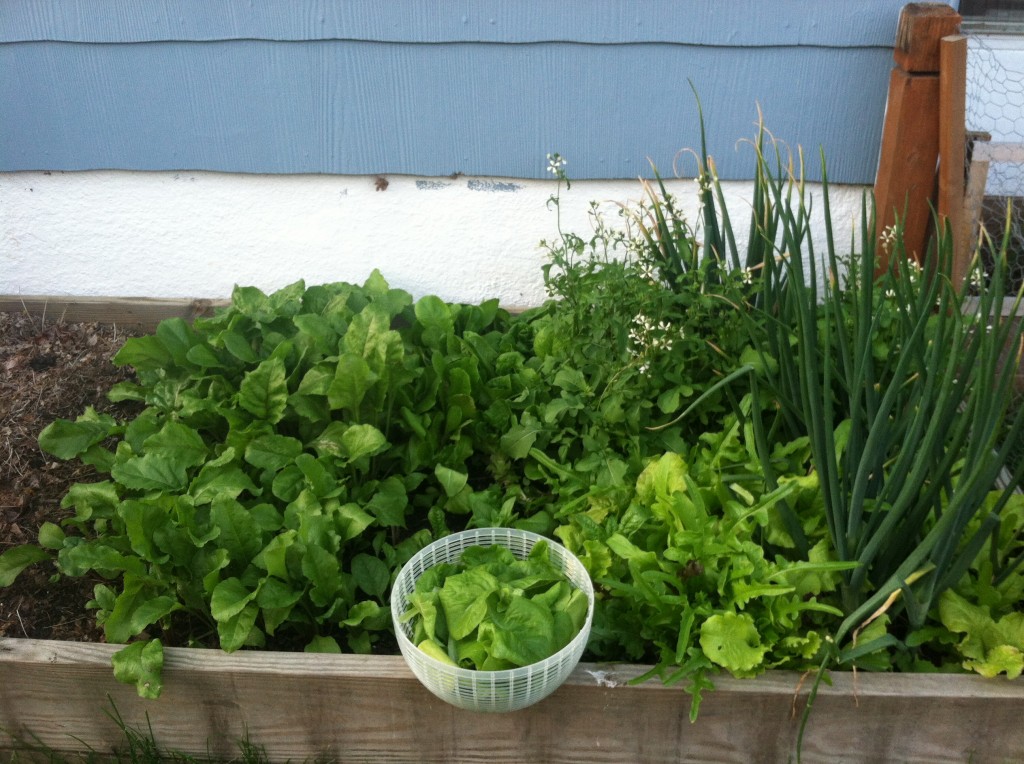 Now we are working our way through the herbs, peppers and tomatoes.  More on that soon.