My booth at Honey Hole Antiques

The Ridiculous Redhead > About Us > My booth at Honey Hole Antiques

A little while ago I told you that I had signed a lease for a booth space at  Honey Hole Antiques in Keyport, NJ.  With all the excitement of Lincoln’s arrival I never got around to telling you about it!

I moved into my booth in the beginning of October.   I had been on the waiting list for a booth and I was so excited when I got the call that there was one available.  When I went to see it, I found out the one available was the first one right by the door!  From all my research (because of course I did a whole bunch of research), I was under the impression I would get a small booth in a corner somewhere at first and then have to move up the ladder.  It seemed a longer process than getting a parking pass at our train station.  So you can imagine how excited I was to be in a big booth right up front.

Here is a picture of the shop from before Lincoln arrived.  (A bunch of this stuff has already been sold!) 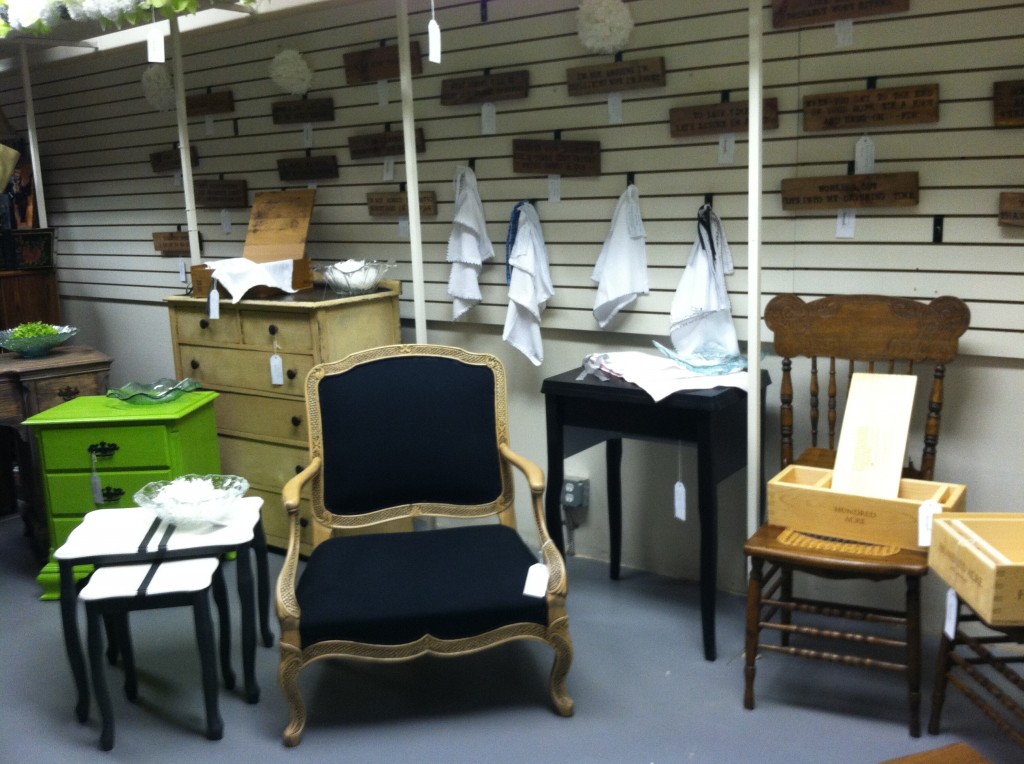 My excitement of course turned to panic when I realized I would have to fill the space.  In anticipation of having Lincoln, I had a “Making room for baby sale” in my Etsy shop.  It was a great way to move a bunch of furniture.  Yay!  The bad part was that now I had very little furniture to fill the shop with and sell.  Oh and I was very, very pregnant.

Being so pregnant meant it would be a lot harder to get more furniture done.   I use very ecofriendly products but this was different.  So that meant no using paint stripper for example.  I was also exhausted and just eating breakfast would make me need a nap.  That meant even sanding something simple would take forever.   Using power tools was still fun so I could still do upholstery with the staple gun and air compressor.  TB tried to help when he could but he was pretty tied up with the house renovations we were going through, which I wasn’t allowed to help with.

The other problem was I didn’t have any furniture to redo.  I had some pieces in the shop but they needed work I couldn’t do. ( I have this awesome 1960s mid century table that has been pushed aside because it needs to be stripped and refinished.)  So after cleaning out the shop and making room I was now out shopping like mad.  I went to more garage sales and thrift stores in the three weeks before opening the shop then I had been to in a while.  I waddled my way though an entire neighborhood yard sale.  I was on a roll of finding things.  The sellers eyes would light up when they realized that I had come looking for furniture and that meant they wouldn’t have to haul that old dresser back into their basement.  It really was fun.

So after some nontoxic makeovers I had barely enough to put in the shop.  I am still working to get more into the booth.  The funny thing is that it’s going so well that every time I think I will have a bunch in the shop, I end up selling something and there is a big hole to fill.  Which is a pretty awesome problem to have.   If Lincoln is nice and sleeps this afternoon I will be making a bunch more of my reclaimed signs and maybe working on some upholstery to bring up Friday morning.

So come visit my booth at Honey Hole Antiques at 14 W Front Street in Keyport, NJ.  My booth is the first one inside the door on the right and there are a lot of other great boothes in the shop.  It’s located right on the main street with a few other antique shops and places to grab some lunch.  McDonagh’s Pub is right next store in case you need a pint after all the shopping.

And this Saturday is Small Business Saturday.  It’s a day to remember that every penny you spend on small businesses stays local and pays for mortgages and dance lessons!