I have been MIA lately but for good reason.  I have been crazy busy.  I have been trying to grow my business is all kinds of ways.  One of those has been to do more craft shows.

First up was the Highlands Festival at Waterloo at the end of September.  It was my first two day show and the most furniture I have had to get ready all at once in awhile.  There was a ton of planning and organizing.  Not only did I have to get a bunch of product ready to sell but I had to pack and prepare for the whole family to travel a few hours away.  And yes that means my toddler with with us the whole time.

I rented a tag along trailer to be able to bring a ton more stuff than would fit in the truck.  I wanted to be able to pack the trailer on Friday, go to the show over Sat and Sun, then return it Monday morning.  Since a tag along trailer is a per day charge only, with no $1.29 per mile (WTF?) like a van rental , it was a waaaay cheaper option.  I have driven horse trailers and boat trailers with no problem.  But this little one axle trailer just about drove me crazy.  I would go to turn the wheel slightly to back it up and it would just go sideways.  After a lot of cursing, we decided trying to only go forward would be the best plan.  Other than that it was a great affordable option. 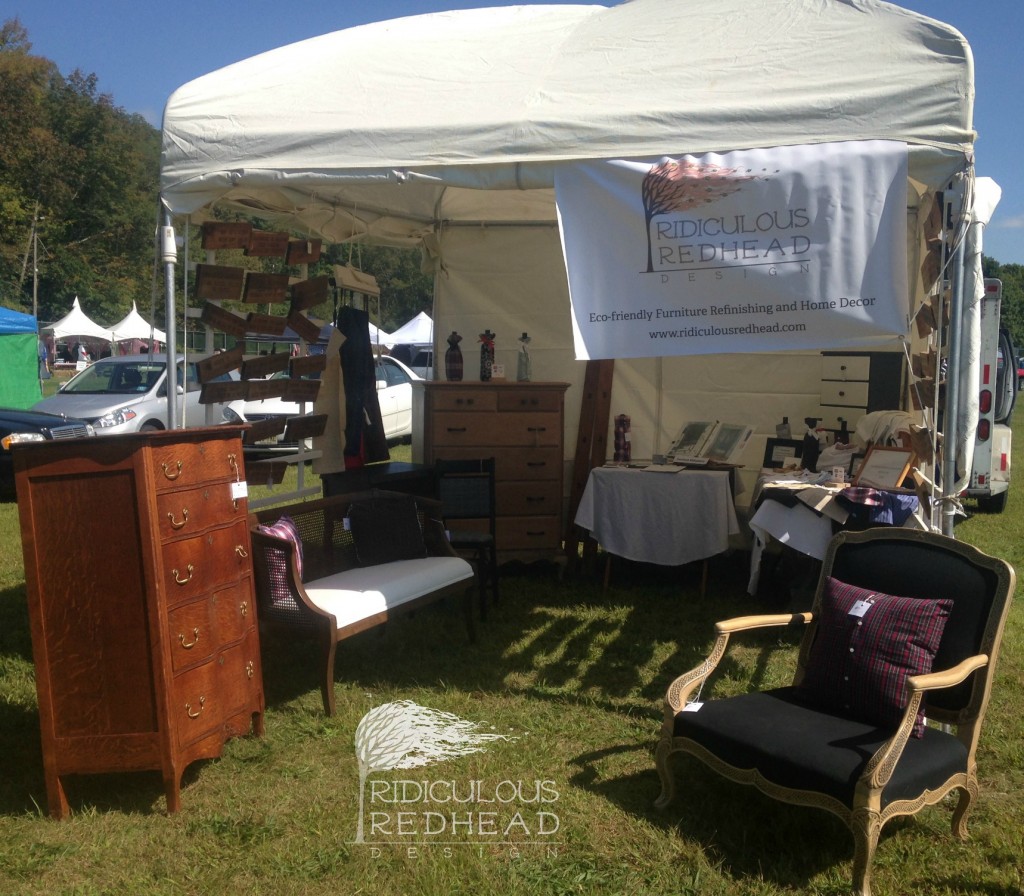 All of the furniture except the dresser in the front is sold!

The show was a music festival and set up in a great big field.  Out spot was bigger than our tent and we got to park right behind it which was very convenient.  It was a nice relaxed atmosphere with great music (for the most part).  It started out so very slow.  Like I was wondering if anyone was coming at all.  But people did start to show up.  Everyone was very nice and so many nice things were said about our booth. I work from home and mostly by myself aside from Opie anf the tiny human keeping me company.  I think my favorite part of shows is just talking to people and seeing if they like the stuff I am making.

The festival went until 9 but we weren’t getting very many shoppers once it got dark.  Since we were in a field it was also getting buggy and chilly and since I like my kid and didn’t want the tiny person eaten whole, we headed home.  It wasn’t a great day but we had covered all our expenses for the show and I was trying to stay positive.

The next day we told Lincoln we were going on another adventure and we were getting bagels again, although he wasn’t as excited as the day before.  We arrived to find many tents blown all over which is a very nerve wracking site to arrive to.  Our tent was perfectly safe thanks to the heavy duty tent handed down from my Aunt Mary and the huge tent weights TB made for me.  It again started slow and I was getting down on the whole thing.  My knight in shining armor found the beer tent and promptly brought me one which made everything from noon on look better.

And then in walked a nice couple who liked the cane backed settee I had.  I had seen them stop in earlier and tried not seem too eager that they were back.  TB was making some kind of deal and the next thing I know he is asking if I can run a credit card!  They also bought two brown cable knit sweater pillows I had made to go with it and was so happy the whole thing I had in my mind was going together.  We told them we would deliver everything on the way home from the show.

And that changed the whole day.

It went from being another time I went on a crazy lark that didn’t pan out to – this worked!  When you are trying to grow a business with a toddler, it sometimes feels you are always behind on everything and nothing is working.  But here we were with a nice win.

We went on to sell a bunch of other things from the booth including signs and other furniture.  I thought it was a great day and we packed up to go home.  We stopped to deliver the settee in the dark and all I could think was please let there be an easy place to park this trailer.  While unloading, I was asked if the dresser I had at the back of the booth got sold.  It hadn’t and I wasn’t looking forward to moving it back into the house since it was solid and heavy.  They said they were interested and I literally made a deal right in the middle of the street!  Thank goodness for Iphone credit card readers!

Of course the dresser was the first thing onto the trailer when we packed up, so TB and I mostly unpacked the trailer onto the sidewalk and brought the dresser into their house.  I just couldn’t believe it all worked out so well.  It was a beautiful dresser but with it being so heavy it might have been impossible to ship.

In October we went to the Ocean Grove Fall Festival, again with the whole family.  It’s a bigger show and we had a spot in the park.  Under a tree.  That would have been great in July but it was a chilly day in October and we were freezing!  It’s been so mild this fall that it didn’t occur to me how cold it might get so I really didn’t pack enough clothes.  When Lincoln fell asleep in his stroller, I wrapped him in a blanket that we packed furniture in.

Here you can see some new products that will be available soon in the shop – adjustable aprons, button down shirt pillows, childrens growth charts and more furniture!

This show wasn’t nearly as successful.  There were a ton more people at this one but mostly just lookers not shoppers.  I thought it was just me at first until I started talking to a few other vendors.   I also noticed that most of the people coming through didn’t have any bags, meaning they probably weren’t making any purchases anywhere.  But I still got to meet a bunch of lovely people, got to hear how great my stuff was and that gets you through a lot of fraudy feelings when you are working late at night.  I also got a few custom orders after the show from the contacts I met that day.   Sometimes a show doesn’t seem like too much of a success until you add in those later orders.

For November and December I will be at the Asbury Park Holiday Pop Up Bazaar!!  I found out about this event too late last year to get in and kept my eyes peeled this year. I submitted my application and was checking me email constantly for any news.  I got my acceptance email while TB was at a job interview (for a job he just started!) so its been quite a few weeks for good news.

The Bazaar is a highly curated market for artisans and vendors being held in the Grand Arcade at Convention Hall on the Asbury Park boardwalk.  For those that don’t live in NJ, the famous boardwalk goes through the building that makes up Convention Hall on one side and Paramount Theater on the other and is covered in a huge glass arcade built in the late 1920s.  It’s such a great building made better with live music, a huge tree, Santa and a bar.  Really, shop with a beer in your hand.  Maybe now you can see why I’m so excited.

I will be at the Pop Up Bazaar on November 28th & 29th,  the weekend after Thanksgiving, and December 12th, a big celebration of Frank Sinatra’s birthday (what other craft show would have something that cool?).  Stop by and say hello!