As I write today’s story, Opie and I are sitting in our sun room.  That’s because it’s one of the only rooms left we can actually walk into.  We are in the process of installing hardwood floors.  And it is quite a process.

The way our little house was made there was only one layer of pine boards installed on the floor joists.  There was no sub floor.  In the last 78 years no one has added to it, but instead took away.  Everytime it was sanded and refinished the floor boards got a bit thinner.  If we had tried to do that again there may not be enough for support for let’s say the couch.  Or the dog.  There was a section that had been repaired before we had moved in but the wood was inferior to the old growth that was there and couldn’t hack the pressure.  It had started to split and break up to the point where if you left the basement light on you could tell through the floor.  We worried one of our taller, huskier friends might fall through.

Here is the old floor.  The finish has taken a beating from a certain someone’s paws sliding through the room while playing ball.  The blue tape at the top right is where the floor was breaking up and I was trying to contain the damage.  Classy, I know. 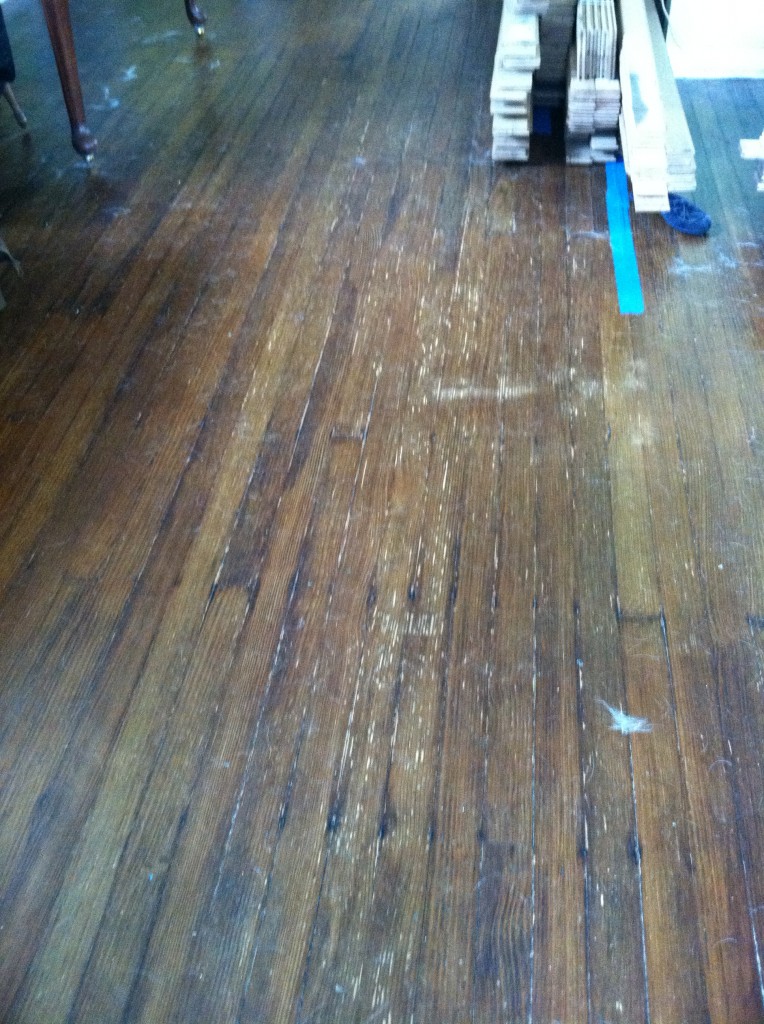 It took me a long time to come to grips with the fact I couldn’t save the original floors.  I didn’t want a brand new floor in my old house that would look out of place.  I was also very concerned with the thought of that floor being made of a bunch of trees that were cut down in the process.  I had been pushing this project off until it became obvious that we didn’t have a choice.

Although I love the cork we installed in my bedroom I didn’t want that for the whole house.  It’s was actually used in the 1930s so it fits but I wanted wood.  So we then went to reclaimed wood as an idea.  This means that old wood that was used to build buildings maybe a hundred years ago would be reused instead of being just trashed or burned.  After being saved, it is remilled into flooring.  Well, lately a lot of people have thought the same thing which is great for the environment but not for my wallet.  Demand means higher prices.  Plus just as with everything else, there are some mills that are shady and sell you a bunch of wood you can’t actually use.

I called Norman at Green With Envy Home Store.  I buy all my paints and stains from him for the design business and he is a very knowledgeable green contractor.  I asked his advice on where to look and he called me back in about 3 minutes and told me to look on Mountain Lumber Co’s site.  They are a reclaimed wood company in Virginia that sources there wood locally.  That means not only are the products not coming from who knows where in China, but they don’t have far to be shipped.

There was a sale on Antique Oak but it was only for a couple of weeks.  That meant I had to buy it from pictures only with Norman’s assurance it was a quality product.  That may seem crazy and well, frankly it was.  I love to research everything and this was a total leap.  I must have asked TB about a thousand times whether I should do it.  And I did.  I bought enough wood to go throughout the living room/dining room, office and kitchen.  It wouldn’t be done at the same time but I wanted it to all match since the house has an open floor plan.

When I ordered with Janel at Mountain Lumber I was told that the sale was on random width and random lengths.  So I gave them the square footage and they sent me a bunch of wood.  The shortest board was 16 inches,  the longest board was 10 feet 2 inches, with everything inbetween.  It also came in 4 widths: 3 inch, 4 inch, 5 inch and 6 inch. It would be made up of lumber from a dismantled barn in Virginia or West Virginia.  Little did I know then the jigsaw puzzle I had just bought.  Here is what arrived. 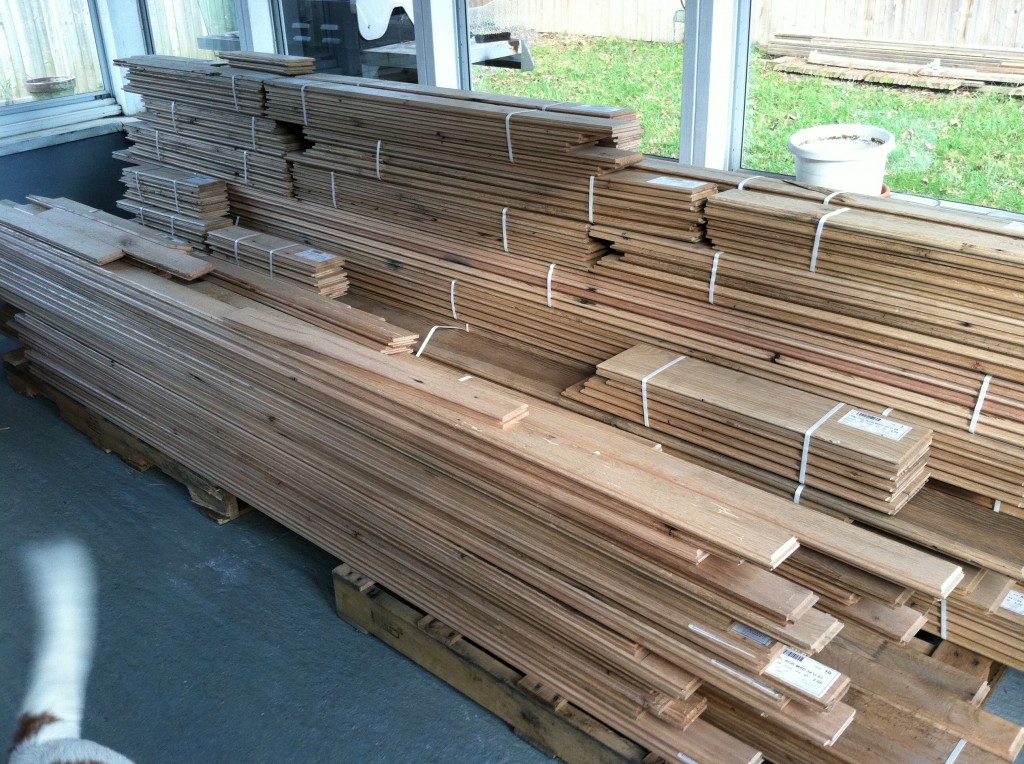 So now that we had picked the wood and it had been delivered we had to install it.  And before Christmas since I am hosting dinner for at the lastest count 8 people.   It’s funny how every project ends up a little ridiculous.  Tomorrow the install!