So today we are going to check in with our seeds and see how everyone is doing after about a month.  I say about a month because Saturday would have been a month but I was too busy on a St. Patrick’s Day bar crawl to talk to my parsley.  Although after that many pints of Harp I may have thought there really was a conversation going on!

We  started out with three trays of seeds and are down to two.  The third tray is now filled with the pots that didn’t grow that I haven’t brought myself to get rid of yet.  This tray includes 3 tomatoes, 1 pepper and all 4 delphinium flowers.  For some reason I have never been able to grow flowers from seed.  I say never but this is exactly twice that I have tried.  As I have already explained I am better with animals than plants and am kind of making it up as I go along.  Maybe the flowers know this and don’t want to be seen in public with me while the veggies don’t care.

When we last left off the cilantro was the rock star, growing faster than it was supposed to and towering over the others.  Oh, how the mighty have fallen.  I have one good pot with two plants in it that have gotten their first leaves. (NOTE: The first leaves that you seed when a seed sprouts are called cotyledon and are part of the embryo inside the seed.  The “first leaves” people refer to are the first real leaves of the plant after these.)  Instead of the oval cotyledon leaves, these actually look like an herb. 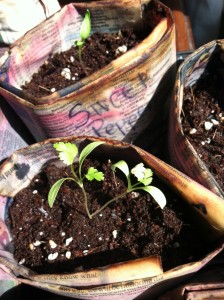 Cilantro in the front

The other two cilantro pots aren’t going so well.  One is completed dead and the other is going a bit yellow.  I have read that this can be caused by lack of food in the seed starting mix and that I need to fertilize.  The great thing about The Google is there is a lot of information out there to help.  The bad thing about The Google is with so many opinions out there, you get a bit bogged down.  One says to do something and another says to never do that same thing.  I didn’t fertilize last year but I used a potting soil with nutrients in it to start the seeds because it was all I had.  This year I have a soil-less seed starting mix that doesn’t have nutrients with the bag saying to fertilize after a month.

So I went to our garden store, Dearborn Farms, which has a more knowledgeable staff than a Lowe’s would.  I got an organic fish emulsion – seaweed liquid fertilizer that I had read about from called Neptune’s Harvest .  The best info I could get off the internet was to feed this stuff at a 1/4 strength of the directions (and eventually each week feed and work up to 1/2 strength).  So with my awesome math skills it came out to about 1 1/2 teaspoons of this stuff per gallon of water.

Now before you yell at me for the plastic water bottle in the picture let me explain that it was left over from the emergency supply from the hurricane.  I was trying to figure out what I was going to mix this in (I was told it was smelly and not to get it all over yourself or you would smell all day) so I went wandering around the basement for an idea.  I saw this and I was set. I added the fertilizer and gave it a shake.  I poured it into a small measuring cup since I figured I would spill this too easily and get in trouble with TB if the house smelled like fish.  I then bottom watered which means I  poured it into the tray my seeds sit in so they could wick up the water and food into the soil.  This way you aren’t drowning the fragile seedling from the top.  It’s also good since the roots have to stretch toward the bottom for water which makes them stronger.

I guess we will see how this goes.  I’ll keep you posted.