One of the best things about our garden is how little upkeep it requires.  Since we don’t use any pesticides or chemical fertilizers I don’t need to know anything complicated.  Add compost.  Add water.  And things grow.

There are of course lots of little things that can make you life easier like mulch to keep weeds out or a trellis so the cucumbers don’t take over your lawn.  Gates to keep your dog from picking all the tomatoes are also helpful.  On the whole I try to keep it simple because it wouldn’t be fun if it was a lot of work.  So here is a round up of the main crops we have going. 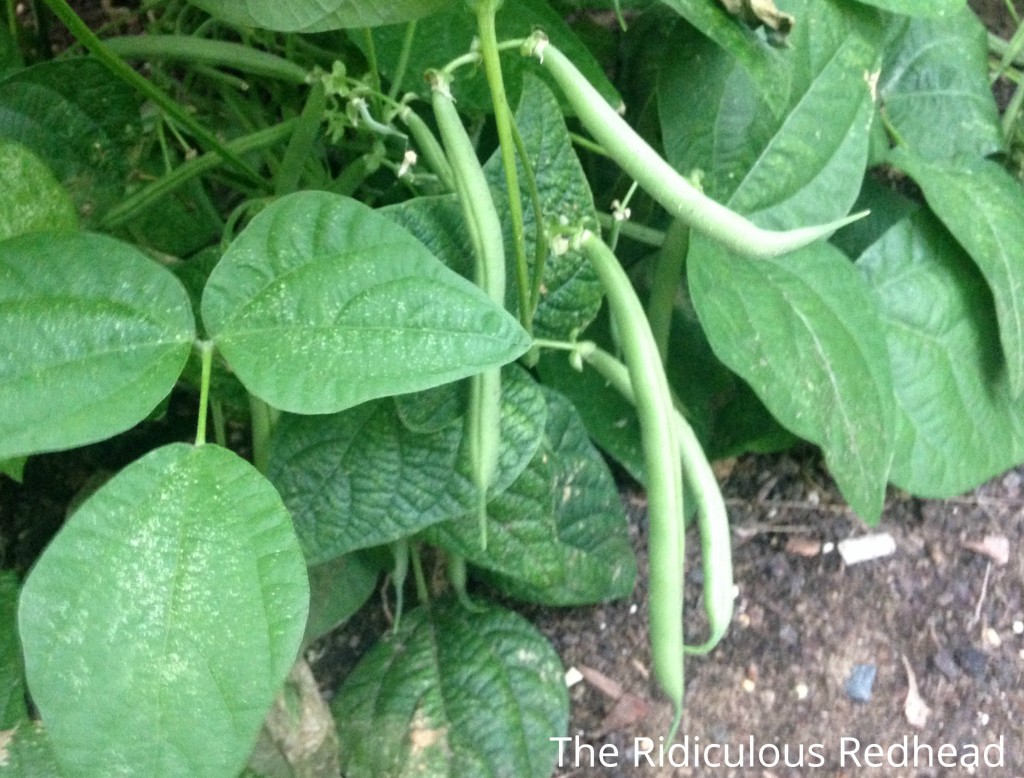 Carrots:  This was the first time growing carrots as I grew up hating them.  Slow roasting them has made me a convert and we ate these steamed, then sauteed with butter and garden herbs.  Delicious.  I will be planting these again soon for a fall crop. 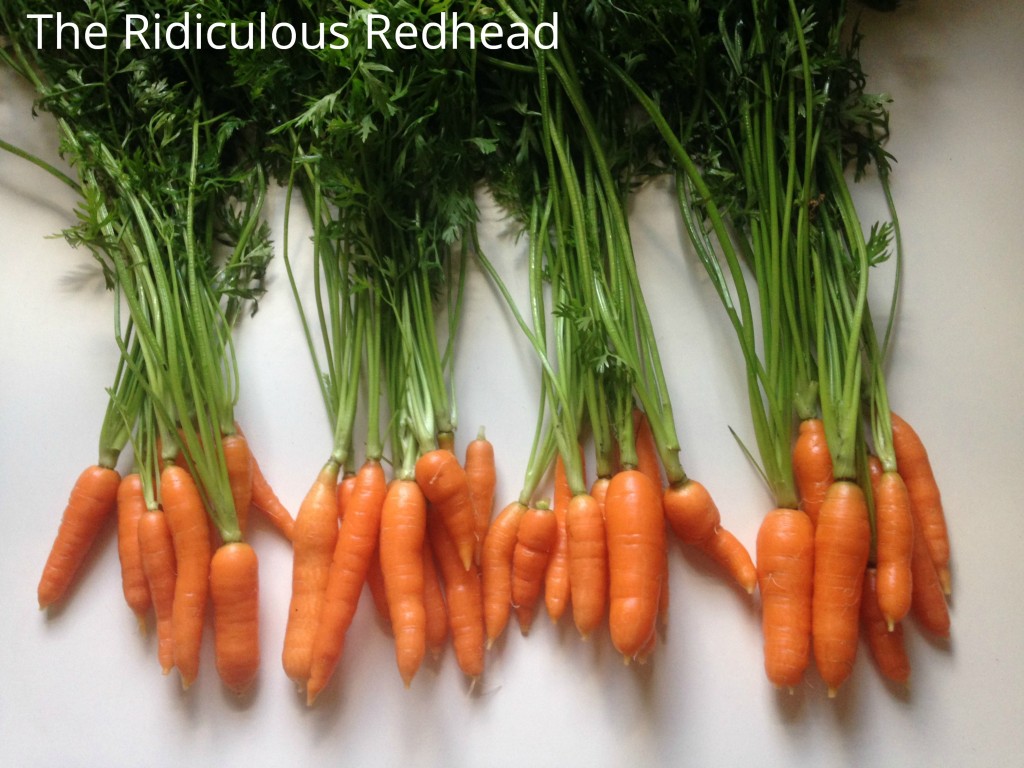 Cucumbers: I am so glad I have these back in the garden again this year.  There are still a ton but Lincoln thinks they are great out of the fridge for teething.  I am trying to keep them trimmed and in check on the higher part of the trellis while the green beans get the ground at its base. 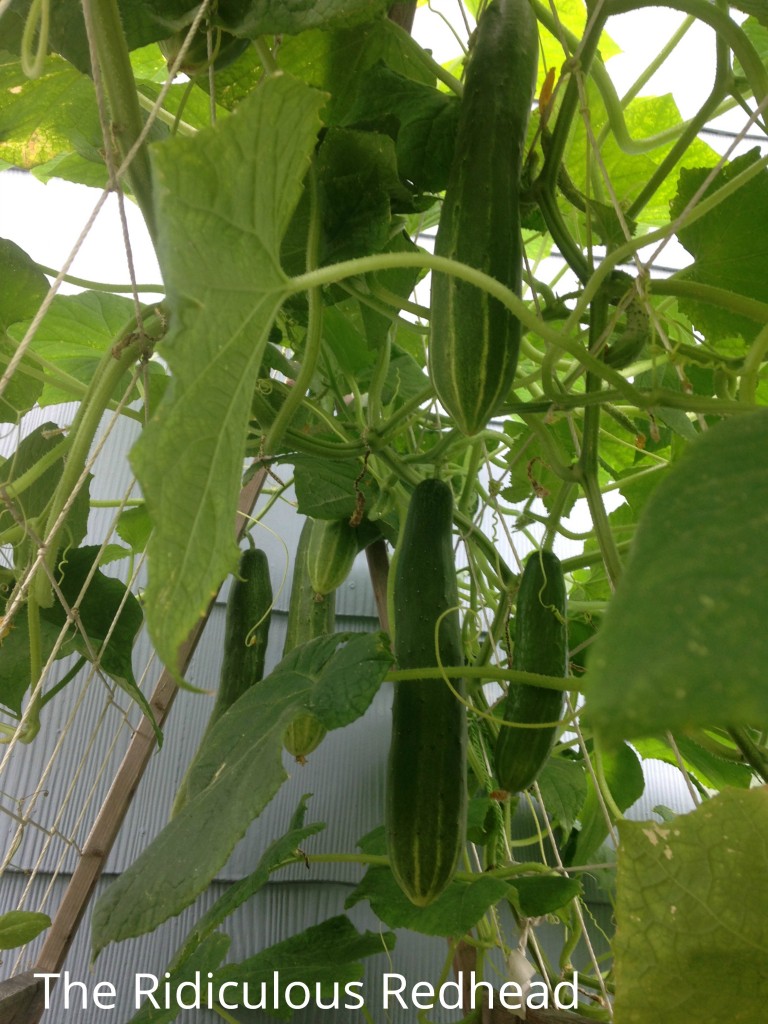 Edamame:  These were supposed to be planted as soon as the garlic was pulled but as you may have read we had some visitors interrupt my schedule.  By the time I was sure the bunnies were gone it was really too late to plant the seeds but I did it anyway.  I don’t think we will get a crop before it gets cold but it’s worth a shot. 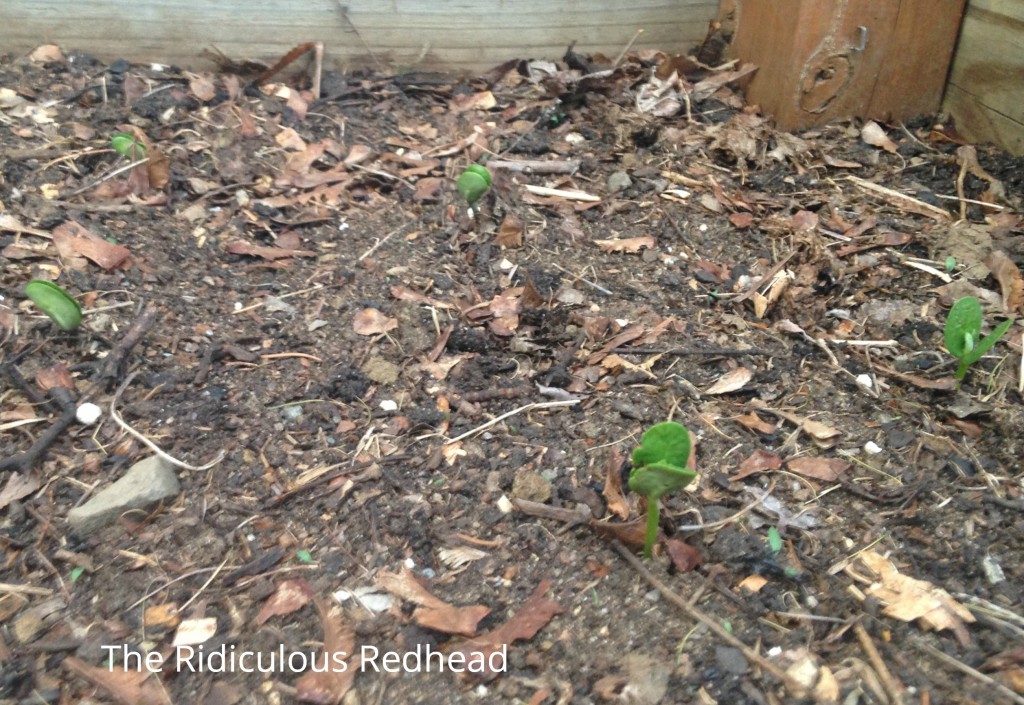 Herbs:  We picked up a few herbs at the nursery the other day to add to the parsley, basil and mint we have going.  In these pots are (from the left) French tarragon, rosemary and English thyme.  And you might notice the ant infested strawberry pot behind them that I still don’t know how to get rid of. 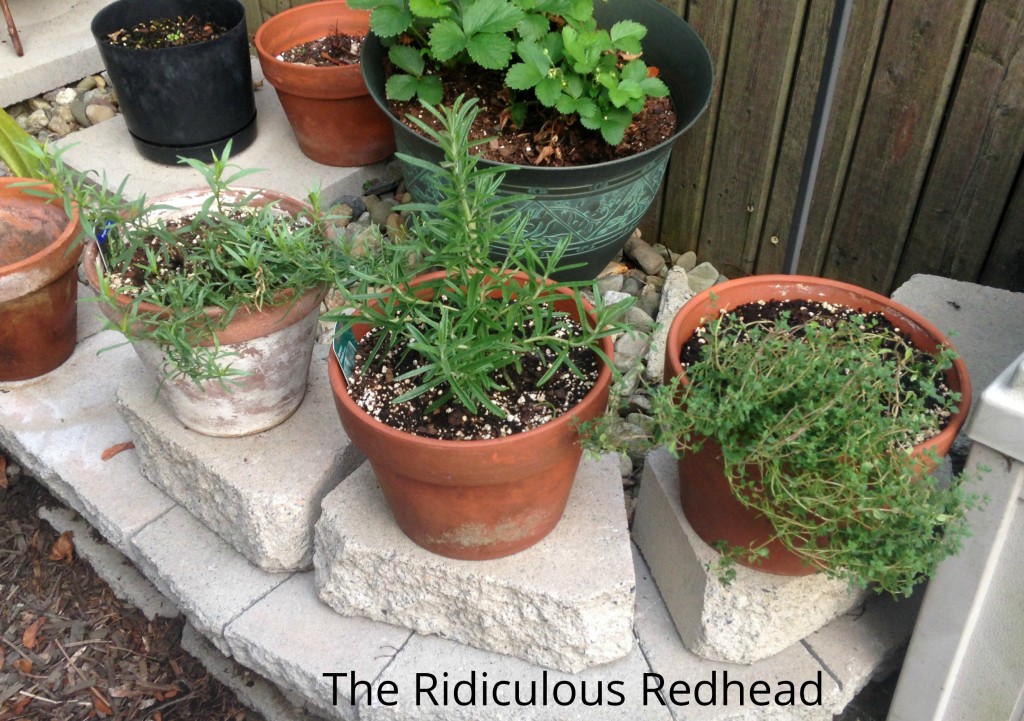 Lettuce:  We have been bringing salads with us everywhere.  Like huge salads.  We have given it away to friends but still we couldn’t eat it fast enough.  This is what happens when romaine, red and green oakleaf bolt and go to seed.  It grows 3 feet in the air and starts to look like Christmas decorations.  It starts to taste like hell too.  I am going to pull these shortly and reseed for a fall crop. 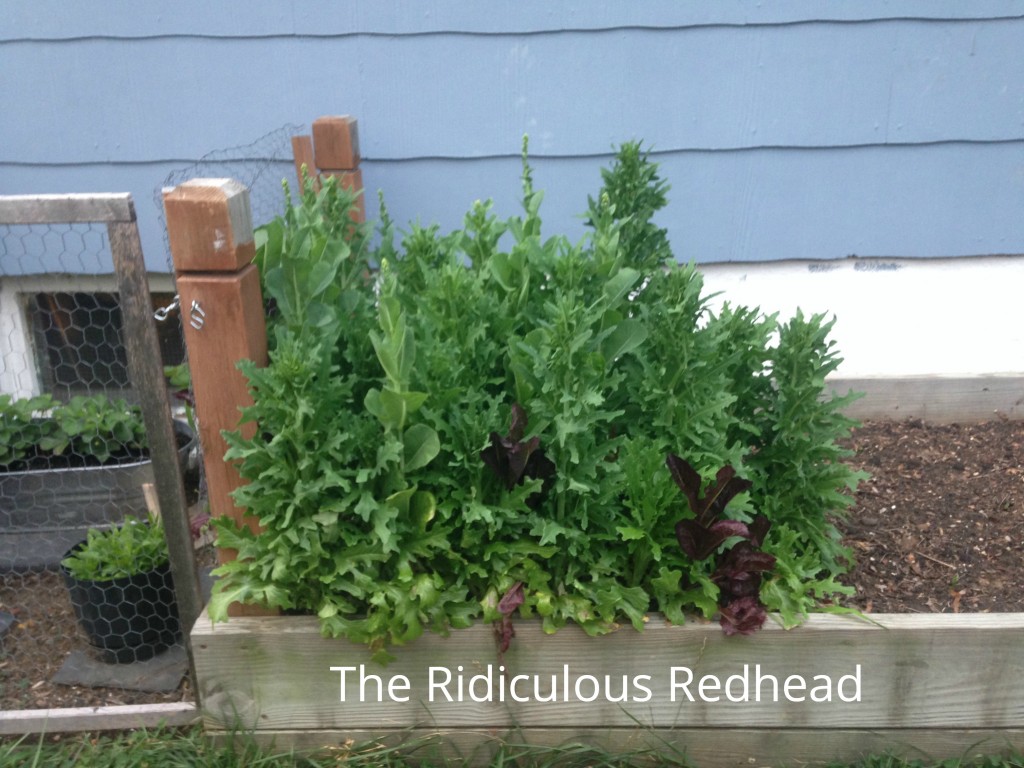 Peas:  These are a cool weather spring plant.  Or so I’m told.  Just like the green beans we got a good harvest in mid June and a few more here or there.  Then a couple of weeks ago the plant started to send up new stalks and leaves.  Then it started flowering.  So now in the end of July we have new pea pods.  Maybe the cucumbers are shading the ground enough that its making the peas happy. 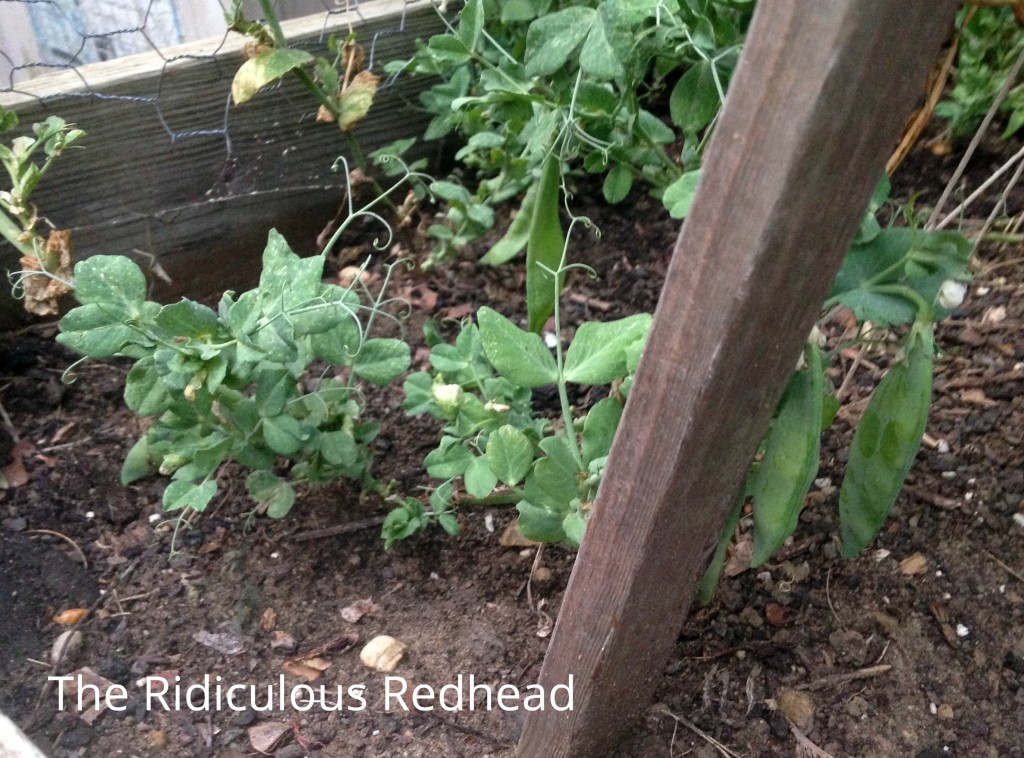 Tomatoes: Oh what’s that?  I said I wasn’t growing tomatoes this year?  Yes, yes I did.  My garden has apparently overruled me.  These are growing in a flower bed that we threw compost in that was supposed to get flowers.  About 30 tomato plants grew here instead and since I hadn’t gotten around to buying flowers I thought it was better than nothing.  I pull all but two (which I think are two different varieties by chance), trimmed them and gave them cages for support. To the left you will see three similar plants in the back which are tomatillos.  I have never grown them but my friend Sarah had some that reseeded from last year she brought over.  This is also another reason to not use pesticides in your yard anywhere.  If I had I wouldn’t be able to keep the tomato plants for fear of what I was eating. 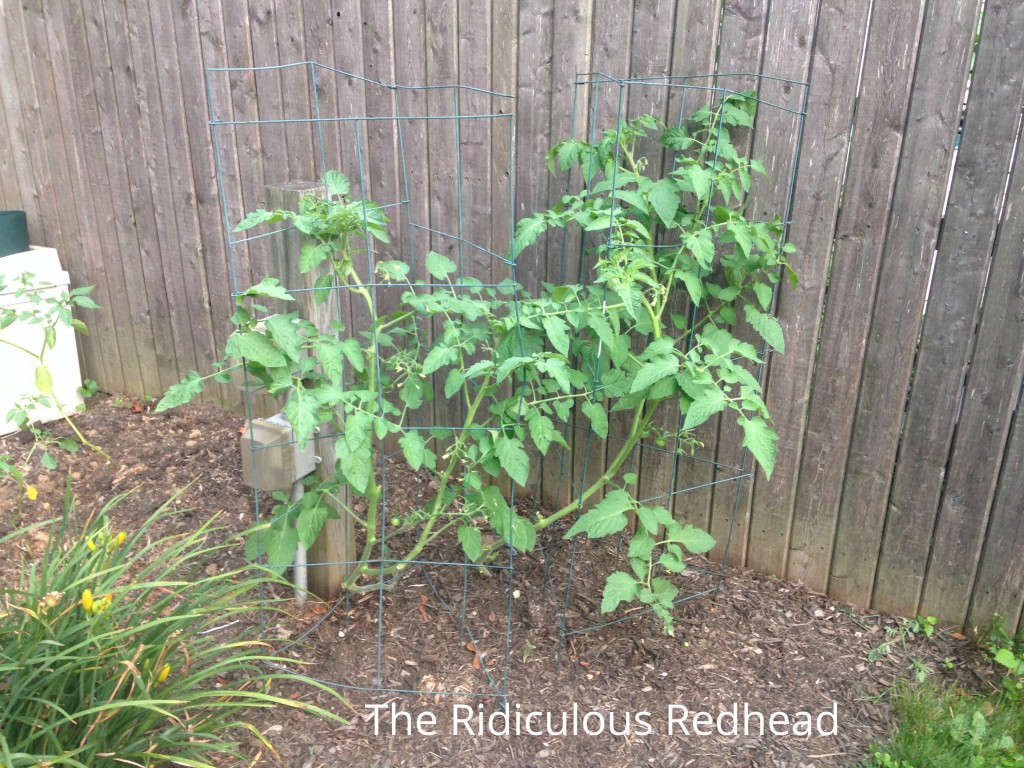 How are your gardens doing so far this summer?  Are you planning to plant crops for falls?